Here’s what happened next:

BECK! I'm so happy this album is AMAZING!!!! ALBUM OF THE YEAR!

It is very strange to see people who don't know BECK or don't realize how important he is to music. He's a musical genius, listen to him.

i remember when beck was just some scrappy kid no one had ever heard of and i threw him the bone of guesting on my album. good job, bud!

.@beck is pretty much the living embodiment of artistry in our industry. His win is a triumph of art over commerce

Every album nominated was artistically valid, of course, especially Beyonces. It's just encouraging someone like Beck finally get his view

Big up @beck and @tomelmhirst for a wonderful sounding album. Well deserved Grammys my dudes

#Beck album of the year! What's going on? The best never wins!

.@beck I ❤️ you more after your response – a true artist & great soul. @kanyewest show some grace. We're all artists w/ our individual gifts

Beck is a very innovative artist. Let him have his award. Ive never heard of anyone doing such a rude thing to a fellow artist. #Grammys2015

Ah opinions. Well: congratulations to @Beck. You made an utterly brilliant album and I'm glad I got to help! Also, way to keep it classy.

Beck is an artist. It's good for the culture when artists win awards over entertainers. Art is transcendent.

If ever a person defined the word 'artistry' it's surely Beck. A songwriter & performer that is unbound by genre and unlimited in talent.

I love beck tho

@beck Congrats dude.Also:send us THE FOAM 2 soundproof our studio. 4 real.No rush, I'll come pick it up when ur ready pic.twitter.com/zA6IIfGnqO

Congratulations Beck on your Grammy win tonight. So honored to have shot the cover of your brilliant… http://t.co/HOMXHrvHEH

We'd like to congratulate @beck and @st_vincent on their Grammys!!

I will say @beck made a deep and beautiful album that I will listen to over and over again for years to come. That's artistry. #beck

Crazy Proud of @beck and embarrassed for that other guy who I am choosing to not mention.

Sylvia Rhone, Kanye West And Others Were Less Pleased

Not everybody was happy for Beck. As detailed here, Kanye West approached the Grammy podium to interrupt Beck’s acceptance speech, and explained his action in a viral interview with E! after the ceremonies: “Beck needs to respect artistry and he should have given his award to Beyoncé…“

Beck is an artist… It's not cool to say that. X

When Kanye’s initial moved towards the stage, Epic Records president Sylvia Rhone tweeted in astonishment of Beck’s win that Kanye should take the Grammy from Beck, sparking antagonizing replies from Spoon, Beck’s PR firm, Nasty Little Man, and others:

Not often the head of a label speaks out like this. RT @IamSylviaRhone: Beck?!?! Seriously….. Take it from him @kanyewest

Lashed out in a moment of anger and bad judgment. Move along nothing to see here,

Since when does Sylvia Rhone know enough about rock music to comment on it? https://t.co/JgUF57N2Aq

Many others on twitter, presumably teens, trended “Who is Beck” shortly after the win (as previously posted about in greater depth here).

@GellarPeace please do not mistake my stats on Beck as some sort of competition against Beyoncé! We all know how excellent she is!

Everyone RELAX about this Beyoncé vs Beck shit. Everyone was chilling backstage together for Christ sakes.

Beck stats I posted earlier were for silly people just too lazy to google and who were being contentious.

There is no Beck vs. Beyoncé. If you think there is, it's simply a construct you've created/perpetuated for your own amusement.

Keep posting infographics, keep posting stats. They mean nothing. Meanwhile, the artists themselves will continue their mutual respect.

Kim Kardashian took to twitter with a joke selfie when Beck won Album of the Year. John Legend, who appears in Kim’s photo, distanced himself from the picture soon after by tweeting, “Congrats to all winners, including @beck. Much respect. That selfie was taken before Album of the Year was announced.” Legend added to Us Weekly that he “looked at [Kanye walking on stage] as just a funny thing that people were going to talk about. It didn’t hurt anybody.” Legend also told the magazine, “Beck is super talented and I have several of his albums and I’ve listened to him for a long time. I think people were surprised that he won but that doesn’t mean he’s not deserving, that just means people thought other people were going to win too.”

This is the Beck won that award face?!?!?! pic.twitter.com/zKSmbK9awm

Congrats to all winners, including @beck. Much respect. That selfie was taken before Album of the Year was announced.

I want to clarify my thoughts on Kanye's actions at the Grammys on Sunday. First of all, Kanye is my… http://t.co/GTOfB5U8dM

Following blowback from his Us Weekly interview, Legend clarified on instagram, “I wasn’t referring to Kanye’s comments after the show which I have now seen and heard. I disagree with those comments. Beck is indeed a true artist’s artist. He’s a multi-instrumentalist, a creative and unique singer-songwriter whose music I have bought and enjoyed over the years. While his win may have been a surprise to many, it’s not because he’s not a great artist deserving of recognition. All of the other nominated artists, including Beyonce, are incredible in their own right, and arguments could be made for any of them deserving to win…But even if you didn’t vote for [Beck], plenty of our colleagues in the music business did. These voters are all creators who love music and have dedicated their lives to it, and the plurality of them chose Beck as the Album of the Year.”

Beyonce’s fans wrote petitions – such as this change.org demanding the National Academy of Recording Arts and Sciences “Rightfully Give BEYONCÉ the 2015 AOTY Award or Disband“ – and edited Beck’s wikipedia page to express outrage that he’s a “stealer/theif from hell most commonly known as stealing the Best Album of the Year awards from Beyonce…” 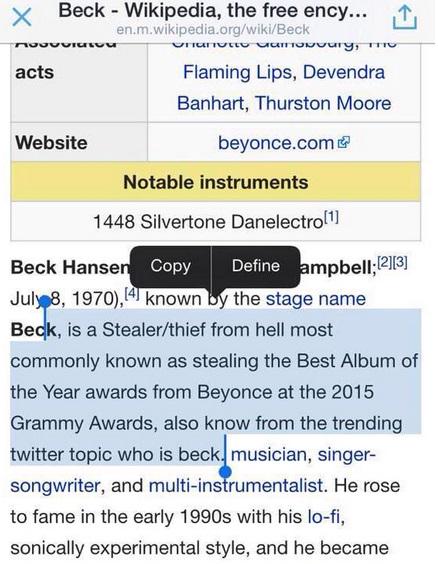 I hope everyone who hated on @beck the other night will at least give Morning Phase a try. It's really tremendous. pic.twitter.com/US4ZyTQdSl

…And the list goes on and on. Even your grandma got in on the action (probably).

Chris Brown – the vinyl enthusiast and retailer who conceived Record Store Day – led Bull Moose Record Store in a campaign to use the media attention that followed Kanye’s comments as an opportunity to raise money for music education and set up a small gofundme: “We’re going to send Kanye the CDs, but we’re going to send the donations to a charity that involves music and kids. We’ve got two Maine charities in mind, but we’d love to hear your suggestions if you have any,” the fund raiser’s page says. “And we’re not trying to be mean. Kanye has given the world a lot. Let’s give something back to him.”

Glad Kanye thinks the #Grammys matter. He probably doesn't "get" rock music if he was so surprised @beck was a credible winner.

We set up a @GoFundMe campaign to send some @Beck CDs to @KanyeWest. We need $131. Want to help? http://t.co/zNVUHIsWvl

Spotify rejoiced on social media when Beck won, but the best was yet to come for the music discovery service: Morning Phase streams spiked 524% worldwide that night on Spotify.

Beck received similar Grammy bumps in album sales, single downloads, facebook likes and twitter follows. Updated stats on all of the above are here.

All of this made for several days worth of segments and jokes on talk shows and late night programs. Wendy Williams – and virtually her entire audience – admitted she had never heard of Beck the morning after his wins. Two nights later on Conan David Spade joked “it’s virtually impossible” to like Kanye.

Beck's “Morning Phase” won Album of the Year last night. Even Beck said, "I had an album out last year?" #fallonmono

Kanye West just ran up, grabbed my “World’s Greatest Dad” mug, and gave it to a more deserving recipient.

The Thursday following the Grammys Kanye performed a much hyped set at the first annual Roc City Classic live streamed on Jay Z’s Life + Times website.  PNYC – an advertising agency located around the corner from the venue – spelled “B E C K” in giant letters in the windows facing the concert, a nod of course to Kanye singling out Beck in his E! interview after the Grammys. A similar sign appeared that same night across from the show’s after party at the 40/40 Club: Matt and Jason from PNYC explained to Gothamist:

“We are an agency actively researching the effects of Out of Home (OOH) advertising. We found out Kanye was playing outside of our building and we wanted to make a point about being in the right place at the right time with the right message and how that can be amplified through digital channels. And… don’t fuck with Beck.”

There's lots of problems with modern music, but the problems aren't Beyonce, Kanye, or Beck.

Arcade Fire had some fun with Kanye’s rant over the weekend following the Grammys as well. It began on Friday with frontman Win Butler wearing Kanye West-designed Nike Red Octobers at the NBA All-Star Celebrity Game in Madison Square Garden. After Win’s team won and Kevin Hart was awarded MVP, Will Butler tweeted:

Kanye, you have to fix this #MVP thing. They have to respect the artistry #WinButler #CelebrityAllStarGame

Win was one of several music celebs to DJ at the Rock On Foundation benefit that night at Bowery Ballroom. Performing as DJ Windows ’98, the set began with a mash-up of Kanye’s “Jesus Walks”and Beck’s “Loser.” On Saturday night, he played the mash-up again at a DJ Windows ’98 late-night set at Baby’s All Right, before uploading it to soundcloud on Monday:

The Sunday following the Grammys, Saturday Night Live celebrated their fourth decade with the star-studded SNL 40th Anniversary Special. Many of the show’s live-tweeters joked about Beck during Kanye’s performance:

I would LOVE to see Beck bumrush this Kanye West #SNL40 performance.

Beck, this is what artistry looks like. Respect it. #SNL40 pic.twitter.com/p5tskYh37v

I think Beck should interrupt this #SNL40

"I think Beck was one of the best, even better than Beyonce" "Kanye, sit down." #SNL40

Later Mike Myers and Dana Carvey reprised their roles as Wayne Campbell and Garth Algar in a Wayne’s World skit counting down their “Top Ten Things About SNL.” Number six on the list was “Musical Guests.” “I think Beck was one of the best,” Carvey joked, “Even better than Beyoncé.” Next on the list: “Kanye, Sit Down!”

West, watching from the studio audience, made a brief cameo laughing it off:

YACHT Build “Kanye, Am I a Real Artist?” Website

“I built this site the day after the Grammys but forgot to tell anyone about it,” YACHT posted on Tumblr. “It’s a magic 8-ball, ask Kanye if you’re real artist and load it. Then refresh if you want a different answer.”

With every refresh kanye.am/iarealartist paraphrases actual quotes from Kanye like this:

…And The Comments Keep Coming

Elton John’s AIDS Foundation hosted an Oscar viewing party on February 22nd attended by Beck, among many other celebrities. Elton told Variety he believed “Morning Phase was “fantastic. I thought it was the most deserved win.”

Many others have also commented on Beck’s Album of the Year Grammy win, focusing more on Kanye’s reaction than Beck’s accomplishment. Among the most recent, Piers Morgan agreed with West’s post-Grammy rant – dismissing Morning Phase as “cheesy guff – and Billy Corgan said he “would’ve knocked him [Kanye] out” (read these quotes in full – and many other reactions to Kanye’s Grammy protest – here).

Aries: You always seem to know what's coming. And then Beck wins the Grammy.

I love Kanye, but I’m raising my children Beck.