Music fans get special releases, labels profit and stores receive a boost of foot traffic unequaled any other day of the year.  That’s a success from every angle, which explains why labels invest more each year to profit from this phenomenon. The first Record Store Day in 2008 had just ten special releases. That jumped to 90 in 2009 and 150 in 2010. Last year there were over 350; today there’s 450 special vinyl up for grabs.  The bump is a direct result of sales increasing annually (i.e. more than 200,000 units sold in 2013 yielding a 3% increase from 2012, according to Nielsen SoundScan; vinyl sales rose 32% over the entire year with 6 million records sold, compared to 4.55 million in 2012, SoundScan reports). 30,000 vinyl discs were sold at the first Record Store Day; several million are expected today.

This is the one day of the year we actually make money at Good Records!! The vault has been opened!

But as Record Store Day has grown, so has it’s detractors, including those who claim it hurts independent record labels. The debate flared in the past month following an open letter from UK distributors Kudos that complained the event clogs pressing plants:

“Right now, we have 20+ manufacturing jobs in production, all of which have come to a grinding halt while the pressing plants make hay by pressing up umpteen thousand Oasis LP re-issues, Abba 7”s and REM Box sets. We have even had one vinyl plant refuse any order of less than 500 units until after Record Store Day.

So, for the next six weeks, we are effectively locked out of the vinyl business.

It now feels like [Record Store Day] has been appropriated by major labels and larger indies to the extent that smaller labels who push vinyl sales for the other 364 days of the year are effectively penalised.”

There are similar complaints from other small labels. Brooklyn-based label Orchid Tapes for instance recently blamed the delay of their forthcoming 12″ comp Boring Ecstasy on pressing plants being backed up with Record Store Day orders.

Is Record Store Day nothing more than a bubble that will eventually burst? Does it hinder the distribution of physical music as these labels suggest? Let’s weigh both sides, starting with the the complaints:

-One of the most quoted remarks about how Record Store Day has gone wrong comes from Red Onion Records owner Joshua Harkavy in a Washington Post article about the 2013 event. “I feel like it’s Record Label Day,” he said. “The sheer number of things they release and the sheer silliness of those releases is too much. There are 400 records, and it can’t all be good stuff.”

-Record Store Day co-founder Michael Kurtz contends the opposite: not only are labels not to blame, many artists and labels are lucky to break even on Record Store Day. Recording new material just for RSD releases, then manufacturing it in small numbers and shipping just a handful of copies to thousands of stores is a costly procedure with little profit margin. “The bands are doing it to help the stores,” Kurtz told bandwidth.org. “Most [Record Store Day titles] are sold for less than they cost to make, and [shop owners] just don’t know it.” Still the idea that labels pump out anything they presume can sell persists. Numero Group founders Ken Shipley and Rob Sevier wrote an editorial for The Wire last year that compared Record Store Day to the early ’90s sports card “limited edition” bubble: “Creating a sustainable vinyl marketplace is going to require more than picture discs, record store days, speculators, and coffee-table LPs.”

-Earwax co-owner Fabio Roberti complains to Village Voice that for a week before Record Store Day his shop gets phone calls: “The two questions are, ‘Will you have this?’ and ‘Can you set one aside for me?’ and I have to say, ‘I don’t know,’ and ‘No, I can’t do that.’ The calls are a real nuisance.”

-Despite the Record Store Day “not to gouge” pledge all retailers must sign to officially participate, collectors (and in some cases, stores) exploit fans with outrageous prices on eBay for limited edition releases.

-Another frequent complaint from store owners is that the high prices of certain items turn off customers and leave them with inventory they can’t sell, much of which deprecates the week after Record Store Day.

-As the number of items available on Record Store Day increases annually, shops complain stocking them all could leave them in debt, as most records won’t sell out.

-The most common complaint from small labels is that Record Store Day has become dominated by major label specialty items and reissues of classic albums, overshadowing new indie releases.

-Some consumers complain about long lines, or the inconveniences of buying limited edition items. Conversely, others complain that as the quantity of “limited” records increase, their “collectible value” diminishes.

-Record collecting was a fringe hobby for most of the ’90s and ’00s. As such, collectors that want it to remain that way are discouraged by the increasing amount of mainstream attention Record Store Day brings to vinyl.

-Veteran reissue producer Andy Zax is among those who takes issue with the sound quality of the new releases, telling Village Voice, “due to digital sourcing and bad pressings, almost no new music is worth buying on vinyl — they’re just big, crackly sounding CDs. All survivors of the 1980s’ ‘CDs good! Vinyl bad!’ groupthink should view 2014’s ‘Vinyl good! CDs bad!’ mindset with equivalent skepticism.”

Why Record Store Day is Awesome

-Not just new music but special releases by a variety of artists unlikely to exist under normal circumstances: exclusive split singles, unique collaborations and other projects.

-Remember: it wasn’t that long ago that the vinyl marketplace was nearly extinct and many albums were not available on record. That’s changed.

-Record Store Day isn’t solely responsible for the vinyl revival of the past half decade, but it’s been crucial in creating both sales and publicity that have propelled the resurgence.

-In doing so it has also created a new market: music fans that may not have considered buying records before but now do (if you’re cringing or shaking you head at this, remember: your favorite store will be no more without new customers).

-This is especially the case with consumers young enough to be “new” to vinyl, even if they’re only interested in Justin Bieber records as Wayne Coyne explained in this video by The Vinyl Factory: “It’s not old people or young people, it’s everybody.”

-In turn many of these young people are learning to appreciation sound in ways they never considered growing up on MP3s.

-For younger generations particularly music is already marginalized by social media, video games, movies and an endless supply of other distractions. Record Store Day brings attention not just to vinyl and stores, but to the very act of listening to music.

-Likewise it’s helped restore a level of engagement that is non-existent in the isolated, clicking-culture of downloading.

-For some collectors Record Store Day has even gone so far as to revive the fun of music shopping, and for many it’s created social benefits that simply don’t exist with online purchases.

-Driving an hour out of the way to track down a limited release that was sold out at your local store can be perceived as an annoyance, but  it can also be viewed as an adventure (that is, an excuse to take a road trip with friends in search of some lost arc). Likewise Record Store Day is increasingly a family activity, parent and child shopping together, and perhaps bonding in doing so.

-Record Store Day has become a key day for record store profits, producing about six times the sales of an average Saturday.

-That plants are operating 24 hours a day to meet demand and still backed up is positive for the industry as a whole (even if it temporarily hurts a few small distributors like Kudos).

-Without the large orders occupying these plants, both plants and stores would suffer. Even if small labels are shut out for a few weeks, their business would be hurt more by plants and record stores becoming extinct. If those REM boxes that Kudos complained about are keeping business alive, Kudos benefits.

-Likewise consumers potentially benefit. The more business Record Store Day brings to retailers, the more those shops can afford to stock throughout the year (possibly even at lower prices).

-Although there’s 450 special vinyl available this year, many are extremely limited runs that will sell in just a handful of stores and some are only available regionally. Shops choose which items they want to stock. It’s their responsibility to not buy inventory that’s unlikely to move. By picking wisely, they can have record profits. No pun intended.

-Even if a record store doesn’t make record profits on this day (ok, fine…pun intended), it’s the top promotional event of the year for most all stores. The value of this exposure can outweigh individual losses if they “win” new customers that return throughout the rest of the year.

-The spike of foot traffic on this day can also lead to sales of the regular stock collecting dust on store shelves.

-Isn’t the mere fact that brick and mortar record stores still exist in 2014 reason enough to celebrate? And if so shouldn’t fans, collectors, labels and stores be grateful for almost every product that help stores stay in business, including MOR releases, “gimmicks” (ie picture discs), and large pressings from major labels?

–UPDATE – The 2014 numbers are in. This year saw a 646% total sales spike at independent record stores on Record Store Day compared to the previous Saturday, a 1,855% increase in vinyl sales for the industry as a whole between the two weeks and a 2,042% increase in vinyl sales at independent stores. Likewise Billboard’s latest vinyl album charts are almost completely dominated by Record Store Day items. Nine of the top ten, and 43 of the top 50 vinyl LPs sold over that entire week were released on Record Store Day. What’s more, 68 different LPs sold more than 1,000 copies each (compared to 17 this same week last year). This success earned independent stores a 19.4 percent share of total physical albums sales for the week, the highest in SoundScan history. Even more remarkable, all 25 of the top sellers on the vinyl Hot Singles Sales chart are affiliated with Record Store Day. Best of all for the vinyl industry, last Saturday’s sales weren’t just a one day spike: year-to-date vinyl sales are up 36 percent compared to 2013. More details and charts of the best sellers are here; streams of the top items are here. 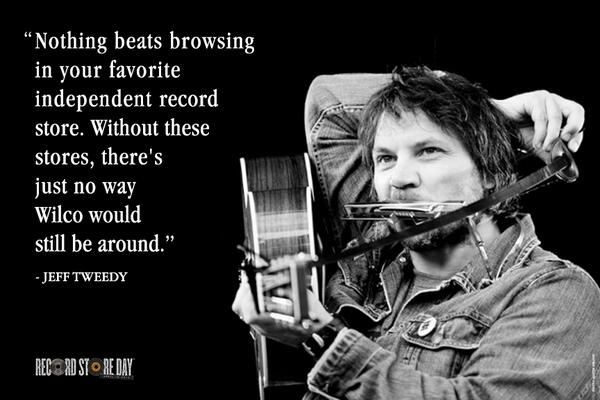