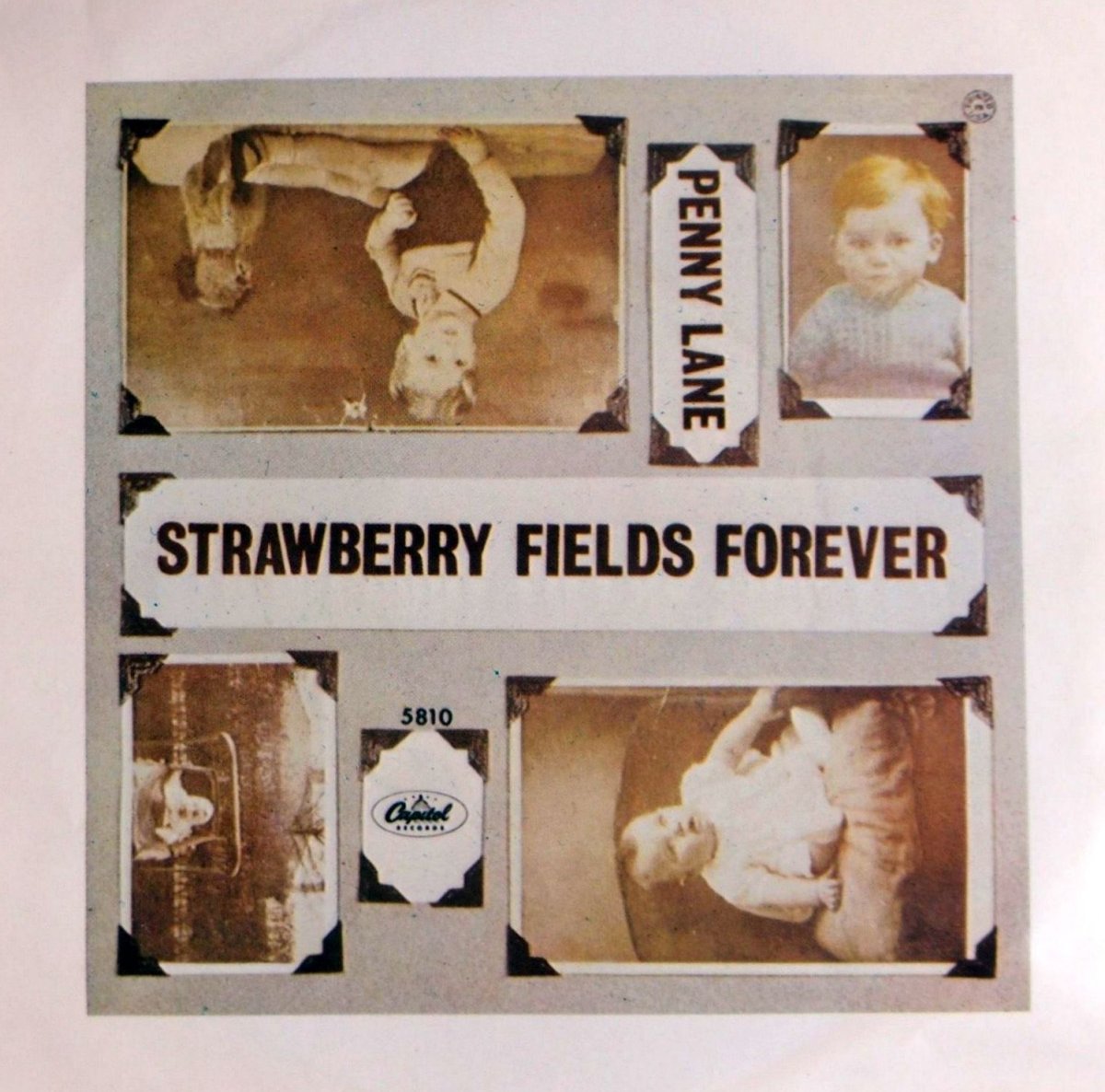 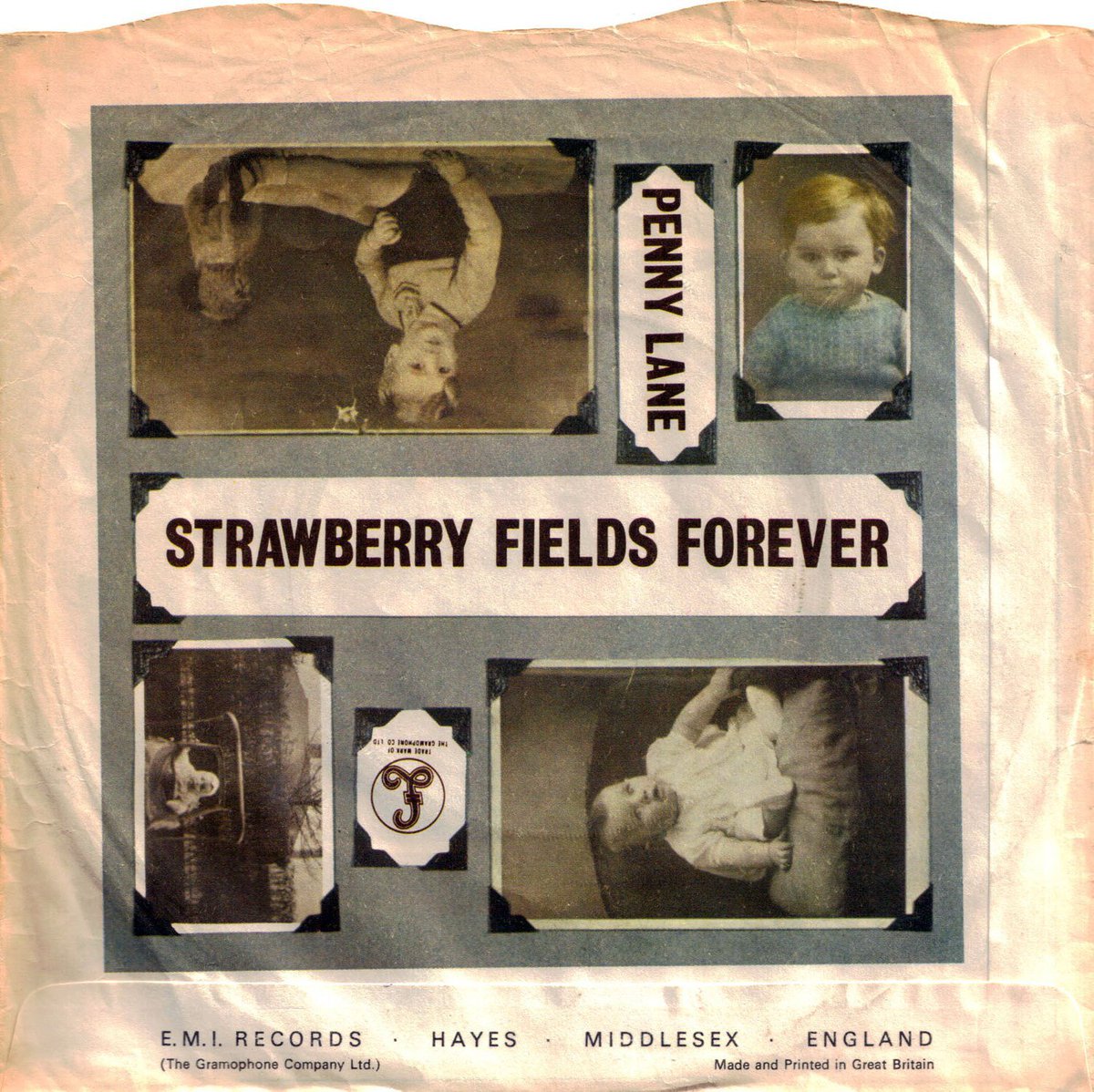 It was fifty years ago today… Capitol Records released what has long be heralded as the greatest 45 in the history of popular music: The Beatles double A-side single “Strawberry Fields Forever” b/w “Penny Lane.” The same 7″ was released in the UK by EMI four days later, February 17, 1967. Much has been said in the last half century about Sgt. Pepper’s Lonely Hearts Club Band status in the history of concept albums. Less often it’s noted that this 45 is essentially a concept single, cover art included. As can be seen above, the record sleeve was designed to look like a typical collage frame of the day with actual pictures of all four Beatles as little tikes as befit the theme of both songs: nostalgia for their youth in Liverpool (Capitol’s West Coast 45 sleeve is above, similar to the EMI release sleeve, right). There were not only numerous alternate covers for its issue in various countries, but even Capitol released two different sleeves within the United States. Record buyers on the East Coast received the sleeve below (which kept the picture frame concept, but ditched the childhood photos for a contemporary group shot): 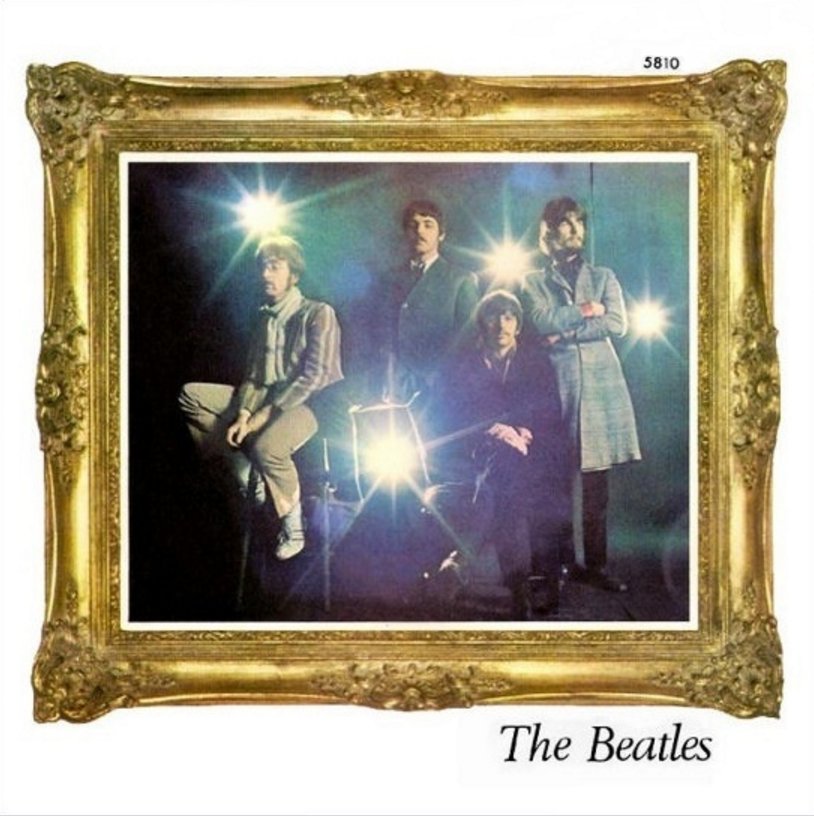 “The only reason that ‘Strawberry Fields Forever’ and ‘Penny Lane’ didn’t go onto the new album [Sgt. Pepper’s],” George  Martin recalled in The Beatles Anthology, “was a feeling that if we issued a single, it shouldn’t go onto an album. That was a crazy idea, and I’m afraid I was partly responsible. It’s nonsense these days, but in those days in was an aspect that we’d try to give the public value for money. Brian [Epstein] came to me and said, ‘I must have a really great single. What have you got?’ I said, ‘Well, I’ve got three tracks – and two of them are the best tracks [Lennon and McCartney] have ever written.’ So, we put them together.” Had these two songs stayed in the running for the tracklist of The Beatles 1967 LP opus it might have become a concept album about growing up in Liverpool, an idea the band was toying with in the early stages of work on the new album. “The premature release of ‘Strawberry Fields Forever’ and ‘Penny Lane’ took all the steam out of the Liverpool concept album idea,” Philip Norman notes in Lennon: The Life, “leaving George Martin to wonder remorsefully forevermore how great an album it might have been.”

Would’ve been, could’ve been, wasn’t. Regardless neither the single nor album suffered. “Strawberry Fields” is especially a highlight, not only for Lennon’s brilliant songwriting, but also the way its arrangement took shape and the ingenious studio production that resulted in the finished release. As the first song The Beatles worked on after their final tour and some time off, the recording of “Strawberry Fields Forever” set the template for how and what the group would create in this next chapter of their career. Trace its evolution with the step-by-step audio samples below:

“Strawberry Fields Forever” began as “It’s Not Too Bad,” a demo John worked on while filming his role for the movie How I Won The War in Spain, October 1966. Below listen to a very early version of “It’s Not Too Bad” before most of the lyrics or the chord pattern that became the refrain section had developed yet. (By the way, that’s an actual picture of John composing in Spain in October 1966; all the photos used for the audio samples in this post are as close as possible to the time and place of its corresponding recording.)

It wasn’t long before the wordless mumbles heard in the earliest demos of “It’s Not Too Bad” developed into the lyrics we now know as “Strawberry Fields Forever,” specifically the line “no one I think is in my tree.” At the same time Lennon also came up with another musical section, heard below starting at the 49 second mark. This new piece of the song eventually became the refrain.

“Always – no sometimes – think it’s me.” The lyrics became wistful and introspective as they developed. Though John obscured the longing in the lyrics behind a haze of hallucinogenic imagery, the sense of vulnerability and self-doubt John expressed in the song became apparent as he continued to work on it.

The photo here shows John in costume and on the set of How I Won The War.

When John returned home from Spain he recorded a series of “Strawberry Fields” demos at his studio in Kenwood, his Surrey mansion. On these mid-November 1966 recordings he experimented with various guitar, vocal, Mellotron and organ overdubs. The sample here is highlights edited down from John’s 17 minute tape (presumably recorded over several days). Portions of this same tape were edited into an officially released composite on Anthology 2.

On November 24, 1966 The Beatles returned to Abbey Road Studios for the first time since finishing Revolver in June and immediately began working on John’s newest song. Take 1 from that day marks the first of three arrangements The Beatles recorded of the song. This is the song as it was captured to tape that first day, including distinctive Beatle vocal harmonies (about one minute in) that were inexplicably edited out of the Anthology 2 mix of this take:

The Beatles next worked on “Strawberry Fields” on November 28th, recording takes 2, 3 and 4 with a new arrangement distinguished by Paul’s now famous Mellotron intro, the key changed from C major to A major and all the hallmarks we now know from the first minute of the released version (a revamped form, Ringo’s expert drum fills, John’s guitar fingerpicking, George’s Mellotron morse-code-like figures, etc). This version was perfected the next day, November 29th, on take 7. The sample below splices together highlights from take 2 and take 3 to give a sense of the progression of the work accomplished at Abbey Road on November 28th.

After completing the track Lennon asked George Martin to orchestrate a new version. On December 8th the band began recording this third arrangement of “Strawberry Fields” by first laying down 15 takes of a new rhythm track. Producer George Martin and engineer Geoff Emerick were late to the session, leaving engineer Dave Harries in charge. “Soon after I had lined up the microphones and instruments in the studio that night, ready for the session,” Harries recalled in The Complete Beatles Recording Sessions, “The Beatles arrived, hot to record. There was nobody else there but me so I became producer/engineer. We recorded Ringo’s cymbals, played them backwards. Paul and George were on timps and bongos. Mal Evans played tambourine, we overdubbed the guitars, everything. It sounded great. When George and Geoff came back I scuttled upstairs because I shouldn’t really have been recording them.” Two takes from this session were combined into a reduction mix the next day, including take 24 with Lennon mumbling “Cranberry sauce” at the end (famously misheard on the finished record as “I buried Paul,” a supposed clue in the “Paul Is Dead” conspiracy theory).

Work resumed on December 15th, the week between allowing time for Martin to write a score requested by Lennon for trumpet and cello, recorded this afternoon on top of the rhythm tracks (backwards cymbals included) from December 8th:

Completely by fluke it so happened that by slowing down take 26 (the orchestrated version, recorded is the key of C) it could be welded together with the sped up take 7 (recorded in the key of A) – an ingenious splice that allowed recordings in different keys and tempos to sound as if they had been designed to fit together!

Next-up: creating its landmark music video. Watch it below: