Robert Fripp will mark the 40th anniversary of David Bowie’s “Heroes” with new King Crimson five-track CD Heroes: Live In Europe 2016. Recorded last year in Berlin in remembrance of Bowie, then recently departed, the EP’s title-track features Fripp revisiting his famous guitar part from the original studio recording of “Heroes,” also recorded in Berlin. “King Crimson performed ‘Heroes’ at the Admiralspalast in Berlin as a celebration, a remembrancing and an homage,” Fripp explains. “The concert was thirty-nine years and one month after the original sessions at the Hansa Tonstudio overlooking the Berlin Wall. This is released in the Fortieth Anniversary year.” The EP comes in a gatefold CD case with cover artwork that pictures the wall:

The EP will feature five previously unreleased live recordings: full and radio edit versions of ‘Heroes’ from Berlin, a 10-minute recording of “Easy Money” from Paris, and edited recordings of “Starless” and “The Hell Hounds Of Krim” from Vienna. Due out June 2nd, Heroes: Live In Europe 2016 is now available for pre-order and will be followed in September with a full King Crimson 2016 European tour live album. Both these releases come as we wait for King Crimson’s first new music since 2003. “A King Crimson 12-inch single is being planned for April: a stomper IMO. It’s a Number One,” Robert Fripp wrote at the start of the year. April has come and past without the release or any subsequent updates. If eventually released it will be their first new material since The Power to Believe and their first 12-inch since 1984. With the band in full rehearsal mode for their summer tour, their first ever with a “Double Quartet Formation” lineup and their first in America since 2014, don’t expect the new music anytime soon. A photo of producer Chris Porter working on the new music at the start of this year and Fripp’s post about the release from that time is below, followed by the band’s updated summer tour dates and photos of the rehearsals currently underway.

The tour will feature a line-up in “Double Quartet Formation,” specifically Fripp, Tony Levin (bass, Chapman Stick), singer/guitarist Jakko Jakszyk, Mel Collins (saxophone) and drummers Bill Rieflin, Gavin Harrison, Pat Mastelotto and Jeremy Stacey with Stacey and Rieflin doubling as keyboardists. According to Fripp this lineup of King Crimson is the first “that has sufficient onstage players to do justice to the extended arrangements and orchestration available on albums via over-dubbing.” This tour is expected to see the live debut of “Fallen Angel,” and thus all of the tracks from their classic 1974 LP Red.

There will be more US dates in October and November expected to cover the south and the East Coast. These are the summer dates: 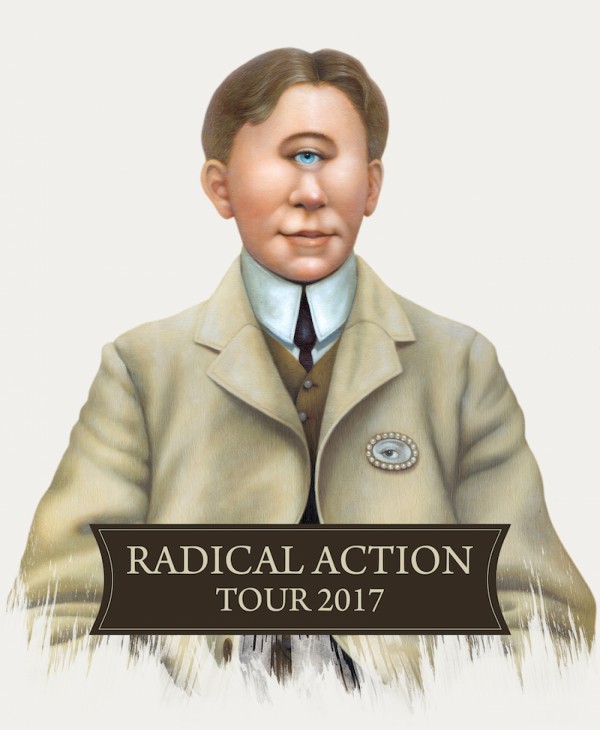