UPDATE – July 9th  A press statement issued to Rolling Stone has confirmed the tracklist previously posted on this page (below), adding that Wes Anderson and (Martin Scorsese music supervisor) Randall Poster co-produced the album with Beck. Officially titled Warby Parker Presents Beck Song Reader, the CD’s release ties into the debut of limited-edition “black cherry” Carmichael eyeglass frames created by Beck, and a new edition of the Song Reader book with two new prints from artist Marcel Dzama. Warby Parker is behind all these releases, though the CD is being distributed through Capitol. CD proceeds will be donated to 826 National – a nonprofit organization helping students ages 6 to 18 with creative writing – and in conjunction with the company’s “Buy a Pair, Give a Pair” program a pair of frames will be given to someone in need for every pair of Beck’s frames sold.  The album cover has also been revealed: 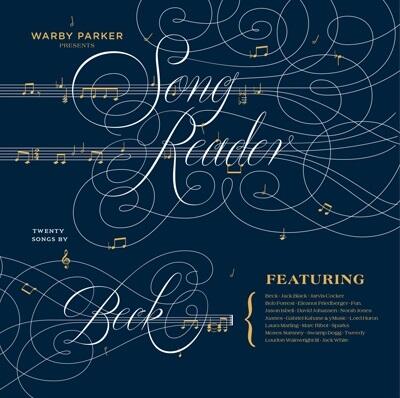 According to songreader.net, “only you can bring Beck Hansen’s Song Reader to life.”

That was the original idea at least. On December 11, 2012 Beck released his new “album” in the form of a book of sheet music. Lavishly published by McSweeney’s with over 100 pages of art, the new songs could only be heard by playing them yourself, or listening to other fans that recorded their performances and uploaded them to YouTube/ SoundCloud/ etc and songreader.net.

Beck fans being Beck fans, some of the results were astounding:

In November 2013 he revealed that two Song Reader CD projects were in the works:

“We’re just trying to get different musicians to agree and I hope that happens soon…If we got people to participate in a compilation of the songs I think that would be great and I’d also love to do another compilation of the versions that fans are doing. There’s some really good versions out there.”

Thank you @beck! What a magical night of music it was http://t.co/ERUZJMijUM #songreader

We now know the Song Reader CD will be issued by Capitol Records on July 29th and can currently be pre-ordered on Amazon. The new disc comes on top of Beck’s latest albums proper – February’s Morning Phase and its “boisterous” as-yet-untitled follow-up, possibly out this fall – though Beck himself contributes just one track. The rest of the album is filled with new recordings by contributors ranging from Jack White to Jack Black. See the tracklist below, via Direct Current Music:

Although still unconfirmed, it appears to be the same project conductor David Campbell – Beck’s father and frequent collaborator – discussed earlier this month with thestar.com: “We did a concert of Beck’s music back in November called Song Reader with the L.A. Philharmonic,” Campbell explained. “We had Childish Gambino and Jarvis Cocker and a bunch of actors — Jack Black, Anne Hathaway and John C. Reilly — who sang songs from the book. The orchestra was the band, which was a new thing for all the performers. It was really beautiful, so I’ve recorded these arrangements and we’re in the process of making an album of it. There was way too much work to confine it to 2,000 people in a concert hall.”

UPDATE – Beck said in a press statement issued July 9th: “Like a kid getting a special package in the mail and opening it up with anticipation, these interpretations of songs from the Song Reader book have surpassed what I could have imagined when putting the book together. The book addressed the idea of a song in its most elemental form, letting others give it a voice. It amazes me to hear how these musicians have made the songs their own and in the process revealed that the interpretation is the living breathing soul of the piece. These interpretations have made the book something new, something better. I was captivated by the notion of working with Beck to bring the entire Song Reader collection to life, enlisting some of our favorite artists to celebrate a great American creative activity: playing music from the sheet,” producer Poster said. “Beck seemed to channel so many American popular idioms; it was an artist’s feast. We have, I think, been lucky to share these great songs with one another and now with music lovers throughout the land and throughout the world.”

Warby Parker co-founder and co-CEO Neil Blumenthal added: “The project’s creativity, originality and innovation made it a clear fit for us, and a fantastic platform for a broader collaboration. We’re extremely excited to announce the Beck Song Reader album, as well as to reissue limited-edition Beck collaboration Carmichael frames and a new edition of the Song Reader book.”

Below is a list of the songs from the book hyperlinked to numerous fan versions of each via whiskeyclone.net, the internet’s top resource and community for all things Beck. To the right of the linked song titles are the artists that performed said song at the aforementioned three Song Reader concerts last year in San Francisco, London and Los Angeles.

I'm so excited about Beck's #SongReader that I'm performing it in NYC 12/18 with all my favorite musicians! Tix here: http://t.co/szLGfODg

Though Beck hasn’t released recordings of Song Reader‘s tunes, others have, most notably Amy Regan’s benefit EP for Blue Star Families (a non-partisan, non-profit supporting military families). Titled simply Amy Regan Sings Selections from the Beck Hansen Song Reader, “America, Here’s My Boy” was released as its first video in anticipation of last Veteran’s Day. Watch above and compare it to Beck’s version from his headlining set at Newport Folk Festival 2013, below:

More of Beck’s performances of Song Reader tunes at Newport Folk Festival are below, as is “Don’t Act Like Your Heart Isn’t Hard” from the May 20th pop-up show – all available to stream or download.. Of course, Beck’s interpretations of these are different than the many variations of each created by the multiple performers that have put their stamps on them – that’s part of the point of the whole project. It’s interesting to note that even Beck doesn’t have “definitive” arrangements. “Just Noise” for example heavily featured Smokey Hormel’s ukulele at Newport (even preceding the song with a minute of banter about the uke, as can be heard below). But when Beck played the same song the day before on the Americanarama’s stop at Jones Beach he took a Beatle-esque, mid-tempo plodding piano approach to the same song.

Thanks, @Beck, for reminding me what a soaringly bittersweet chord Fmaj7 is. It brightened my morning. #SongReader

Beck wrote in his Song Reader preface: “The opening up of the music, the possibility of letting people work with these songs in different ways, and of allowing them a different accessibility than what’s offered by all the many forms of music available today, is ultimately what this collection aims for.”

And opened up it has. In addition to fan recordings online and Beck’s three Song Reader showcases, musicians of all stripes have participated in their own Song Reader live events – for instance NOMAD Nation’s secret concert, “The Satellite Sessions: A Full Moon Music Experience,” shows hosted by NPR’s World Cafe and The Current,” all of the performances referenced in the below tweets and this. Royal Canoe and Portland Cello Project both went a step further by making video series of their concerts. Song Reader has also been embraced by schools, such as Full Sail University. With the CD set for release in less than a month, are Song Reader remixes the inevitable next step in “letting people work with these songs in different ways”?

That’s not all. Beck’s dad suggests a tour with strings. “We’ve talked about doing a tour that would be with orchestra, going city to city and using the orchestra in that city, and I think we’ll eventually get to it.”