On May 13, 1957 LIFE Magazine published a landmark article by JP Morgan’s vice president R. Gordon Wasson, “Seeking the Magic Mushroom.”  The piece – the third in the magazine’s “Great Adventures” series – was a catalyst for Swiss scientist Albert Hofmann to isolate psilocybin in 1958 for lysergic acid diethylamide distribution…
. . . LSD, that is…

Hofmann was already the first person to synthesize and ingest LSD – from ergotamine, in 1938 – but the LIFE article marked a new chapter in the evolution of the drug.  Likewise (soon-to-be acid-guru) Timothy Leary traveled to Mexico in search of the magic mushrooms described in that article…. and the rest is drug history…

The 1957 piece put the magazine at the media forefront of experimentation with LSD, which was legal through 1968.  In the mid-’60s the mainstream media became fascinated with the drug, prompted by a second landmark LIFE article – March 25, 1966’s cover story.  Three-plus decades later, one of the photos from that issue inspired The Flaming Lips – a visual stimulus during The Soft Bulletin’s recording sessions and eventually the album’s cover photo (albeit distorted and psychedelically colored-in by Lips’ visual collaborator, George Salisbury).

Lawrence Schiller’s original photo is above.  The caption in the 1966 magazine read, “A user, “freaking freely” at a session of the Acid Test group in Hollywood, gyrates with his own shadow until he collapses.”

Below are excerpts from the magazine’s cover story – a time capsule of how the drug was viewed pre-Summer of Love:

“The colorless, odorless, tasteless substance called LSD can be made in any college chemistry tab. A black market dose costs only $3 to $5. But that is enough to send a person on a 10-hour “trip”–sometimes into a world of beatific serenity and shimmering insight, sometimes to frenzy and terror. In either case the person who has taken this remarkable drug never sees life quite the same way again.
Within the last three years the use of psychedelic (consciousness- expanding) drugs has exploded. No longer just a promising psychological research tool, LSD has been taken up by a large underground cult. Starting in artistic, bohemian and intellectual circles, the cult has now become a dangerous fad on the college campus. At least one million doses of LSD (which stands for lysergic acid diethylamide) will be taken in the U.S. this year. Hospitals and doctors are suddenly treating scores of panic-stricken young patients who have “taken a trip” on LSD with disastrous psychological effects. Some have been hospitalized for weeks. Now the federal Food and Drug Administration is moving in with new laws which will outlaw LSD’s illegal manufacture, sale or transportation. Many states already make mere possession of the drug a crime. Only last week, former Harvard Psychologist Timothy Leary, a long-time user of and proselytizer for LSD, was sentenced to a 30-year prison term for smuggling marijuana and was pointedly held for psychiatric tests. The government crack-down has already cut heavily into legitimate research on LSD, but declaring it illegal may only make it more tempting to thrill-seekers who take it for kicks. At any rate, the genie of LSD, with all its tantalizing possibilities for good and evil, is out in the open. 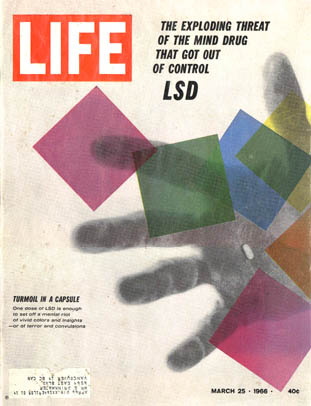 Religious Psychologist Walter Clark, a professor at Andover Newton Theological School, had a vision after taking a psychedelic drug, “like Moses’ experience of the burning bush… These drugs present us with a means of studying religious experience in the laboratory,” he says. “No psychologist of religion can afford to be ignorant of them.”

Millionaire investment banker William Hitchcock, 26, a financial backer of Leary and Alpert’s work, rents out a mansion (background) on his Millbrook, N.Y. estate to a foundation which does psychedelic research. He has used LSD, feels that it helped him reach a more positive attitude toward his family and job.

Retired Navy Captain John Busby, 44, used LSD just once and solved an elusive problem in pattern recognition while developing intelligence equipment for a Navy research project. “With LSD, the normal limiting mechanisms of the brain are released,” he says, “and entirely new patterns of perception emerge.”

Ignorance about LSD is almost universal. Here is a medical report on the risks and benefits insofar as they are known.

It is a relatively simple chemical compound, lysergic acid diethylamide. It is easily synthesized from lysergic acid, which comes from a parasitic fungus that grows on rye heads. It is called a hallucinogen and is similar in its effects to marijuana, peyote and certain “magic” mushrooms.

What are the physiological effects of LSD?

These are surprisingly mild, considering the monumentally disruptive nature of the psychic effects. There is an increase in blood pressure and heart rate, but not enough to be alarming. The blood sugar also goes up slightly. There may be other sporadic symptoms: nausea, chills, flushes, irregular breathing, sweating of palms, trembling of extremities. These manifestations are all transitory. Appetite is affected, but mainly because the subject is too enthralled by his own sensations to be interested in food; later he is ravenously hungry. Sleep is virtually impossible until at least eight or 10 hours after the whole LSD episode is over. The pupils of the eyes are widely dilated so that dark glasses are often worn even at night for protection against the light. With an average dose, .0001 of a gram, the effects begin within an hour and last for eight to 10 hours. A bigger dose speeds up and intensifies the experience, increasing the possibility of panic.

Does LSD cause hallucinations?

No. A true hallucination has no existence except in the imagination, yet the person experiencing it believes implicitly in its reality. The visions conjured up under LSD are usually based on something real. A stick may become a writhing snake, for example, and though the person may be frightened by the snake, he realizes that it is not a real snake but an illusory one.

Might there be long-range adverse effects on the brain?

Yes. In a small number of cases people under LSD, even people with no prior history or suspicion of epilepsy, have been seized with violent epileptic convulsions. A young bull elephant in an Oklahoma zoo was shaken with gigantic fits and died an hour and 40 minutes after the administration of what was mistakenly considered to be a moderate dose of LSD. Cats on high dosages of LSD for a three-week period underwent significant changes in their brainwave patterns, changes that persevered for six weeks after LSD was discontinued. No one knows what long-term changes would occur in the human brain as a result of sustained dosage, and no responsible scientist would dare carry out the experiments necessary to find out.”