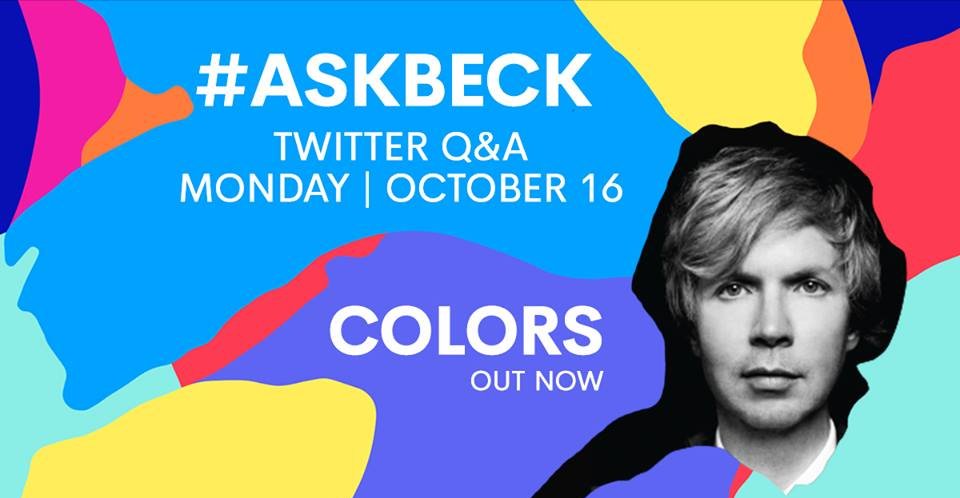 Beck doesn’t tweet much – if at all. Sure he has an active account, but it’s strictly business – presumably handled by an assistant or somebody at Capitol Records. Beck’s preferred social media outlet is clearly instagram. But he has a new album out (in case you missed it, here’s the lyrics and tracklists, and here’s the complete run-down of its numerous editions – like the double LP deluxe version, the Target exclusive etc – and the artwork for each). With the new album finally released (after multiple delays) Beck is spreading the word on its release via all means possible and thus took to twitter to personally answer questions from fans. For easy reading all the Qs that Beck A-ed have been compiled below in the order he responded:

if I’m lucky both at the same time. https://t.co/GYcDVsZdnu

It changes week to week. devil’s, tambourine, wow, go it alone, say goodbye all having a good run this year. https://t.co/vxYDPPCCqG

#AskBeck Amazed no one has asked yet… what's your favourite colour? 😁

@beck How did you decided the order of recorded songs? #AskBeck

#askbeck Do you have any pre-stage rituals? Also, I was at Omeara and just wanted to say thank you – such a special gig :)

amazing gig. Omeara best sounding room of 2017! we all just tell each other to have a “great show” like that scene at the end of spinal tap. https://t.co/ve0Neg08mX

#AskBeck How would you describe your writing process for Colors, and does it differ from how you’ve written other albums?

write a song, then rewrite it. write it again. start over. change the lyrics. throw away the chorus. forget the song. (1/2) https://t.co/qjq8wml7I3

#AskBeck Have you played with the slime and is it satisfying?

I probably know too much about slime. its a cottage industry in my house. you are never quite satisfied. slime fulfillment is elusive. https://t.co/AkwzUEb01g

@beck which song off of the record, Colors, took the longest to complete? #AskBeck

besides the entire album, Color/dreams/up all night tie. little embarrassed how long I messed with those. https://t.co/FYhX6NcLxx

Too hard. purple rain is perfection though. https://t.co/8Xl7TCqQXk

@beck If you could taste colors, what flavour would #BeckColors be? #askbeck

What’s a new (to you) instrument that you’d like to learn to play and possibly feature in your future music? #Beck #AskBeck

one from fb – two hims. collaborated on the design with jimmy turrell. past our deadlines and out of desperation, (1/2) pic.twitter.com/KBbMBEMslP

found a simple portrait, said put it in a hexagon surrounded by white, then add a few colors. cover is exactly what he sent back to me.(2/2) pic.twitter.com/C6Gargl3us