Additionally Jimmy Turrell and Steve Stacey created a customizable album cover for the double red vinyl deluxe edition. It consists of multiple die cut transparencies that fans can combine in layered designs of their own choosing. 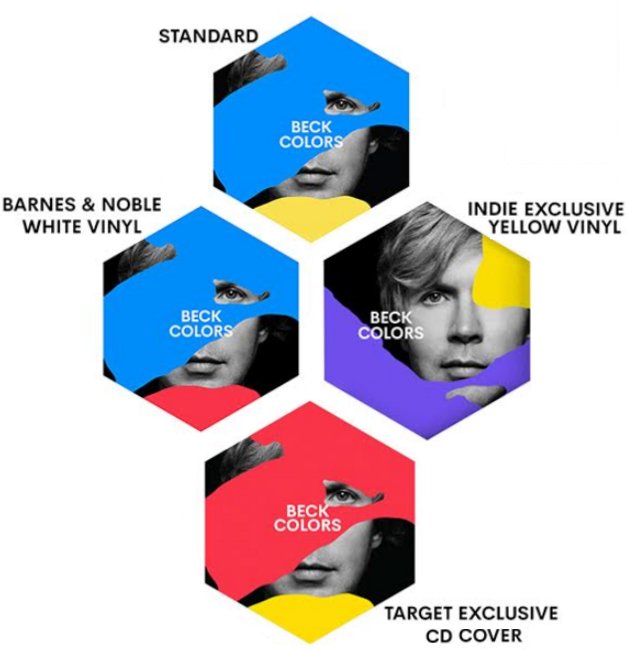 The musical feel of the album is ostensibly classic pop which after the more downbeat, acoustic “Morning Phase” is quite a shift in gear. Obviously the fact that the album is called “Colors” definitely influenced the general aesthetic of the whole campaign. After chatting with Beck we decided to bring together globular paint-like forms, simple geometric shapes and stripped back typography to create visuals that really summed up the melodic, upbeat nature of the album.

We also looked at things that we remember being visually engaged and interested in as kids. Simple shapes, bright primary colours. Everything from Ludo, Connect 4, Stickle Bricks, Plasticine and Slime came into the mix.

“There weren’t any strict design frameworks or grids to adhere to. It was very much a case of exploring what we felt worked best,” Jimmy elaborated to It’s Nice That. “I worked very closely with Beck on every aspect of the artwork from its initial conception until completion. Beck really knows his stuff when it comes to graphic design as a whole so he was never short on bringing ideas to the table,” Turrell told Dezeen. “It was cool getting a third opinion from the actual artist,” he added to It’s Nice That.

There’s numerous ways to buy Colors besides those outlined above – among them CD copies autographed by MC Hammer and several bundles at shop.beck.com that include an exclusive Colors shirt, a kaleidoscope, a numbered/limited edition of 250 worldwide enamel pin, a separate pin set or a laser engraved glass prism.

Full details on all editions are below.

The tracklists for all editions (along with song-by-song previews and complete lyrics) are here. 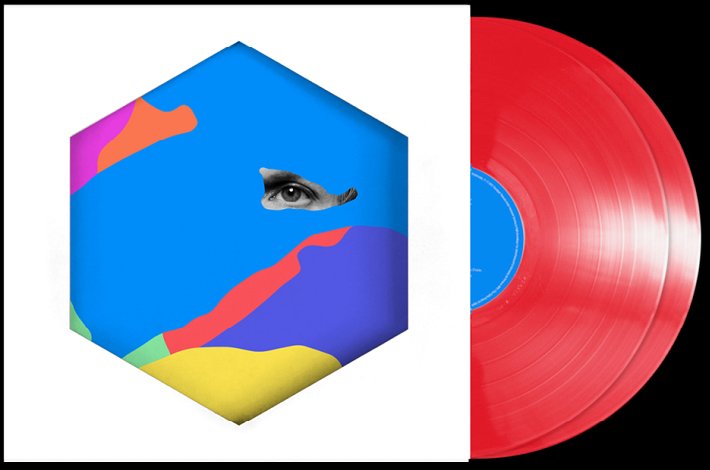 This limited edition deluxe 2 LP set is pressed on red 180 gram vinyl and plays at 45 rpm for maximum audio fidelity. It comes with a 24 page lyrics art book (previewed in the GIF to the right and the official preview video below) and transparency prints to make the album cover fully customizable (similar to Beck’s 2008 album The Information).

Drawing inspiration from childhood memories, Jimmy Turrell and Steve Stacey designed the customizable cover with bright colors and shapes reminiscent of paint splatters on several layers of die cut transparencies. Each layer fits in the cover’s central hexagon allowing fans to assemble multiple formations with them – each a unique album cover, as can be seen in the pictures and GIF below: 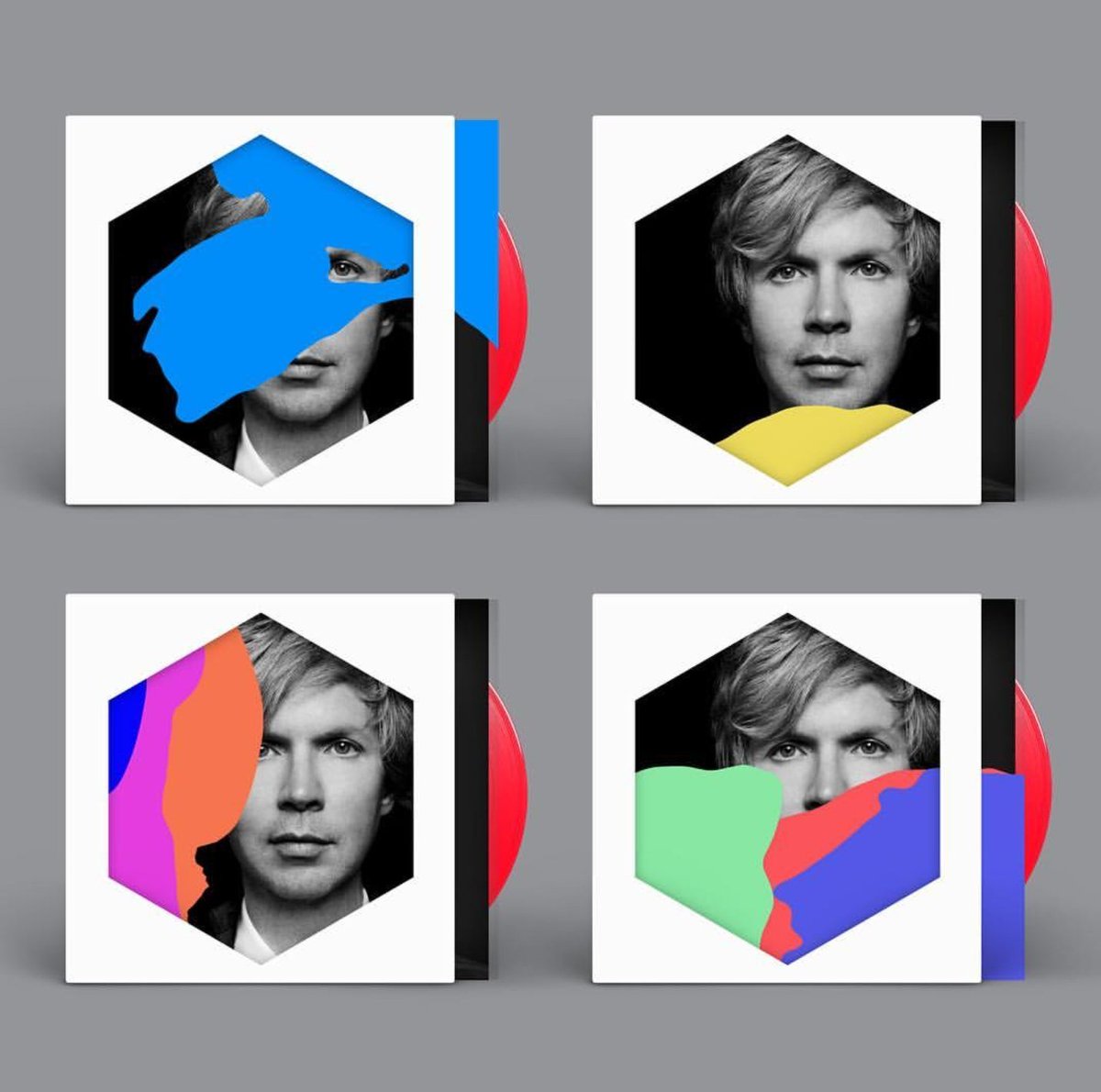 “The album is a collection of experimental pop tracks,” Turrell explained to Dezeen. “In a visual sense we wanted to run with that. So we went for punchy, geometric shapes and primary colours jammed together in a fun, almost childlike manner, but hopefully with a certain edge.” 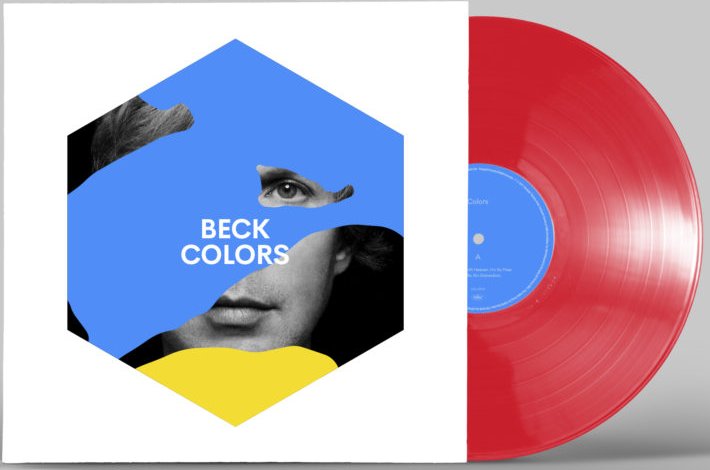 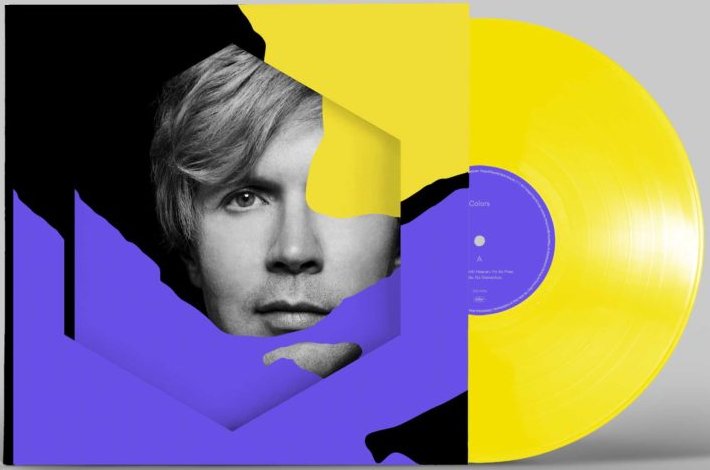 Support your local record store – link in bio. I want to thank the independent record stores out there for their support of Colors and all of the records I’ve put out over the years. Crate digging for vinyl was a crucial part of my musical education and a major activity growing up. It’s great to see the indie record store community as alive as ever. Having a physical space to gather and find music is an important thing in 2017. A lot of the time and energy put into the design of this album was for the vinyl version specifically. We wanted to make something in the spirit of the special records that made it clear that a great record package is an art form as well as another dimension to the music. The deluxe version has two 45 RPM red discs and transparencies that customize the way the cover looks. We also did a yellow disc version with a different cover for the Indies. Vinyl as a collectable object is still a part of my desire to make music. There is still nothing cooler than seeing your record take a place on the shelves of that special record shop alongside a universe of discs. Let's keep the vinyl alive. Take care, -Beck

The yellow vinyl limited edition is sold exclusively through independent record stores and comes with a Beck slipmat at some locations. On Colors’ release day Beck shared a message to the indie shops keeping vinyl alive on Instagram, shown above, and provided a resource for fans to find their local record stores on his website. 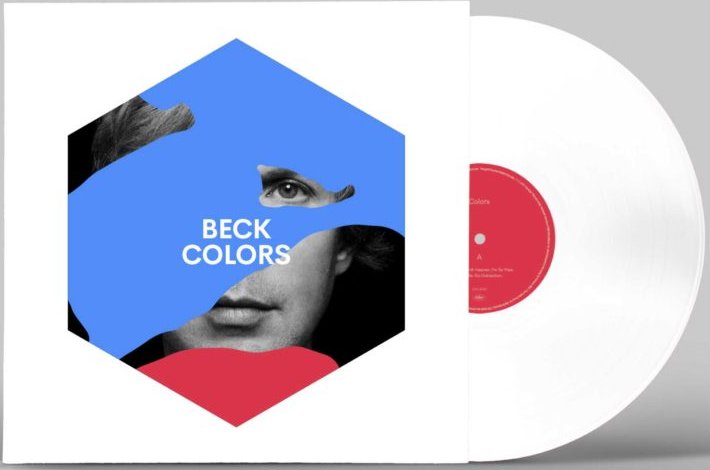 This limited edition white vinyl edition is sold exclusively at Barnes and Nobles. 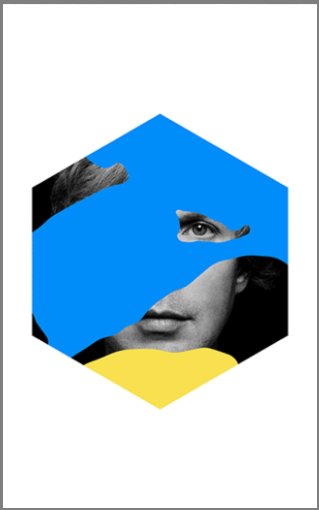 Fans don’t have to go to Cap’n Cork to get the new Beck cassette; it’s available from his website and wherever new tapes are sold (which in 2017 means Amazon, srcvinyl, fatbeats, etc).

Cassettes from Beck.com have been delayed and are expected to be delivered mid-November (but fans that ordered the tape through the site will still receive their complimentary download of the album on October 13th). 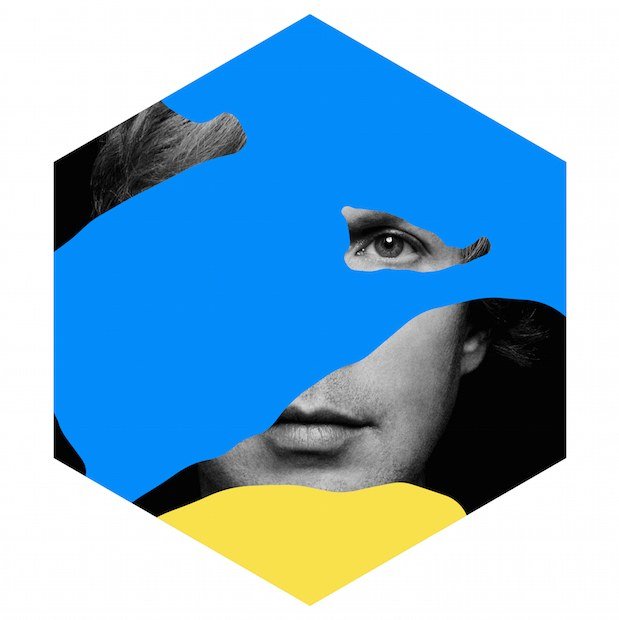 Colors is available as a digital download on Beck.com as both a 320 kbps mp3 and a 44.1 kHz WAV file, as well as all other digital retailers (Amazon, iTunes, etc). 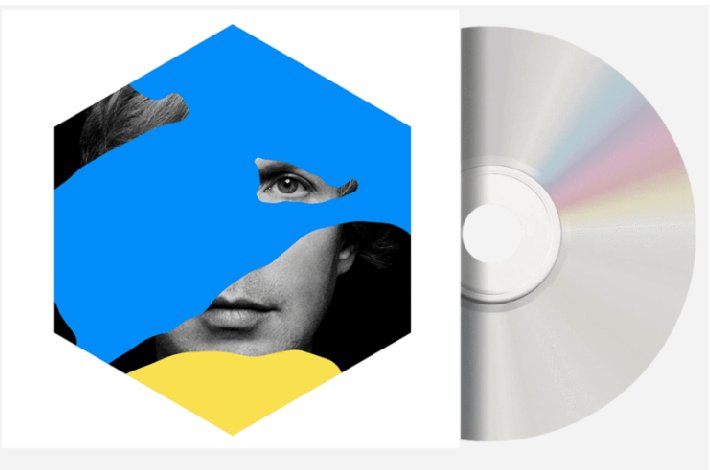 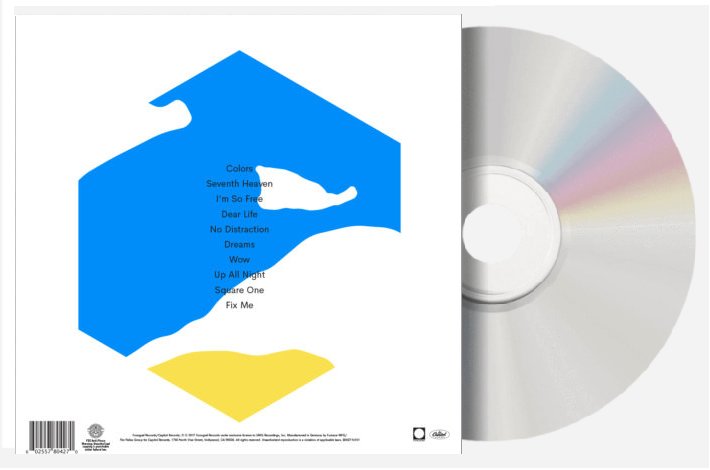 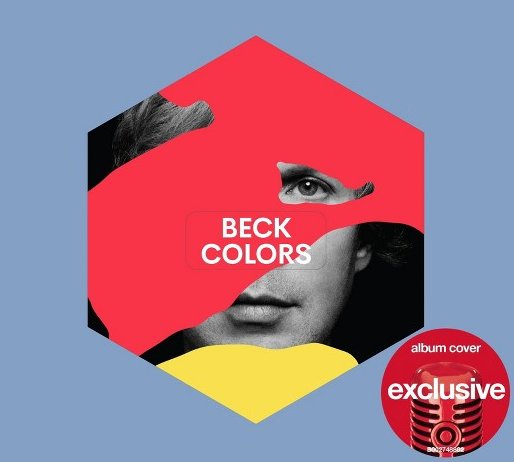 The CD edition sold at Target features an exclusive album cover variation, as shown above.

You can’t touch this! Newbury Comics is selling CD copies of Colors with the booklet autographed by Beck’s labelmate and fellow ’90s icon MC Hammer.

“The vibes are right on Beck’s new album,” Hammer says in several tweets (shown below). “It’s a great party album.” 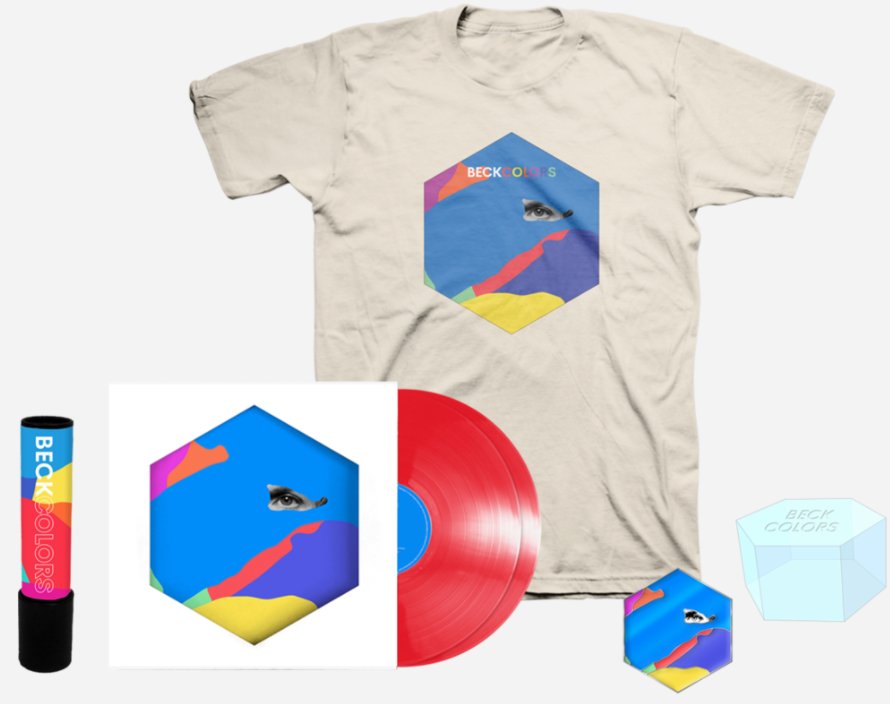 Beck.com offers several bundles. The deluxe bundle can be ordered with the standard vinyl (single LP with 4 panel booklet, see above for more information), the deluxe vinyl edition (with 2 LP and 24 page booklet, see info above), or standard CD edition (see info above). All three variants include an exclusive Colors t-shirt printed on a 100% cotton, a Colors kaleidoscope, a limited edition numbered enamel pin and a laser engraved glass prism measuring 5″ x 2″. Both the pin and the prism are limited to 250 worldwide. 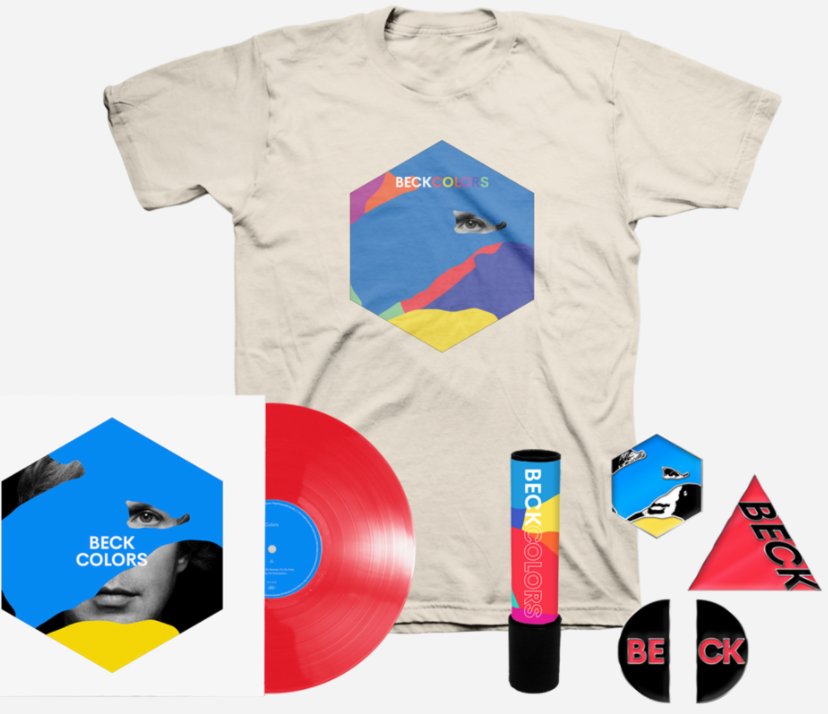 The pin set bundle through Beck.com can be ordered with the deluxe vinyl (with 2 LP and 24 page booklet, see info above), standard vinyl (single LP with 4 panel booklet, see above) or standard CD edition (see info above). All three variants include an exclusive Colors t-shirt printed on a 100% cotton, a Colors kaleidoscope and three enamel pins featuring Colors artwork. 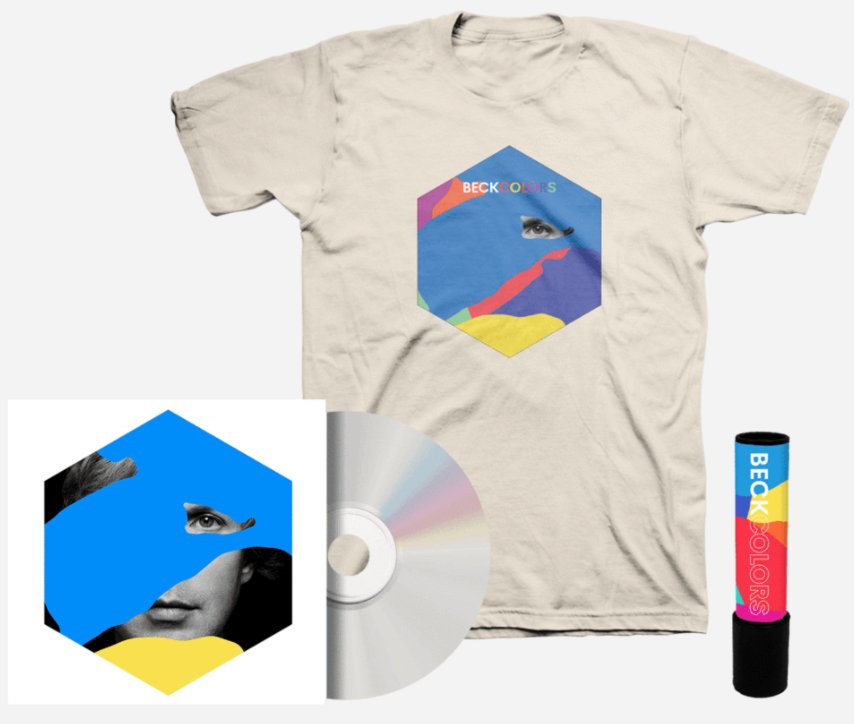 The shirt and kaleidescope bundle through Beck.com can be ordered with the deluxe vinyl (with 2 LP and 24 page booklet, see info above), standard vinyl (single LP with 4 panel booklet, see above), standard CD or digital editions (see info above). All four variants include an exclusive Colors t-shirt printed on a 100% cotton and a Colors kaleidoscope.