December 17th Update
From Warner Brothers press release: “Flaming Lips frontman Wayne Coyne will hit the road this Thursday, December 19th, for what is being billed as his “Record Store Tour.” Coyne will be meeting and greeting fans and signing copies of the Lips’ first-ever EP, The Flaming Lips 1st EP,
and The Flaming Lips 2nd Cassette Demo.

Wayne will be selling an extremely Limited Edition version of the EP which will be housed with a hand-crafted, custom-made solid chocolate skull. Anatomically correct and life-sized, of course. Each skull will contain a special Golden Coin that is redeemable as admission to any headline show byTHE FLAMING LIPS in the world. See below for all of Coyne’s upcoming tour stops.

This product contains quite a substantial amount of high-quality, gourmet chocolate accompanied by the main course: A generous earful of the very earliest music created by THE FLAMING LIPS in their original incarnation and pressed onto color vinyl. A feast for the senses, we’re pretty sure you’ll find this exclusive item delicious and satisfying on every level.

The Flaming Lips 1st EP will be available as a limited edition 12-inch on green vinyl and signed by Coyne. The last time this recording was available on vinyl was in 1986. It was originally recorded in two sessions at Benson Sound in 1984 and released on the group’s homemade label Lovely Sorts of Death Records. This edition has been remastered by LIPS bassist Michael Ivins and given a reimagined cover by freak artist Charlie Immer.

Also for sale, will be The Flaming Lips 2nd Cassette Demo (recorded in 1983), which will be available as a limited-edition 7″ on blue vinyl and signed by Coyne. Originally recorded in 1983, it captures the group in a transition from its primitive shambolic drug-damaged punk-pop to the primitive shambolic drug-damaged hallucinogenic cosmic brother death rock heard on the 1st EP. The music has been remastered by LIPS drummer Kliph Scurlock and the cover photo is by Wayne’s brother, Dennis Coyne. Both items go on sale from participating record store retailers on December 24th and only 2,000 copies of each piece will be made available.

December 11th Update
Wayne Coyne is selling the first five chocolate “Skull Mega Boxes” tonight at Austin’s Waterloo Records. Wayne will meet fans and sign autographs from around 6:00/6:30 through closing. Priority wristbands will be given to those who purchase Lips products – including Fuck You Frogs, also on sale tonight. Wayne describes the Skull Mega Box as a “life size human skull made completely out of delicious white chocolate with crystal blood red hard candy blood…dripping onto…brain made entirely of pink and gray chocolate [which] contains magic black and hold disc that allows the holder…entry to a Flaming Lips concert.” The skulls are signed by all original band members and package the edible skull and brains with a “cerebrospinal fluid” New Fumes-designed re-pressing of the band’s debut EP.  Box of Stars’ fundraiser will also have one skull available tonight.

December 4th Update
According to recordstoreday.com the re-issue of the Lips’ debut 12″ and the 7″ with four unreleased 1983 songs are now scheduled to be released Christmas Eve.  There are no plans to release the first cassette demo on 7″ at this moment.  Although the 1983 demo on 7″ has yet to sell as a stand-alone item, it sold on Black Friday at Dwelling Spaces OKC/ The Womb in very limited quantities in a plexi-glass box with the Fuck You Frog (see the bottom of this post for package details).   Peace and Paranoia, Peace Sword, and  Stone Roses cover album The Time Has Come To Shoot You Down…What A Sound were all available in various on Black Friday as well.  Best of luck finding any stray copies still in stock.  If you know of a store that has Peace and Paranoia or The Time Has Come… tweet the location @TheFutureHeart for a retweet that could make some other fan’s day.

For over a year The Flaming Lips have hinted at a 30th anniversary commemorative release in 2013.  In March Wayne Coyne posted on Instagram that he was working on a life-size chocolate brain containing every Lips song.  And then there’s all these teases.  As it turns out, there’s actually three records due in stores after Thanksgiving.  And yes, one of them is a white chocolate skull with edible goo brain – though not the band’s every track.

“A lot of stuff and always moving towards the deadline,” Coyne told Rolling Stone, “we’ll see if the chocolate skull will happen [on Black Friday]. If not, it’ll be around for Christmas.”  The three 30th anniversary records are all scheduled to begin selling on November 29th.  “A lot of stuff” indeed. Especially as it’s the same day the band will issue three other special items: Peace and Paranoia (12″ split EP with Tame Impala with multi-color vinyl designs by New Fumes; 2000 copies pressed, the remaining 1500 to sell at indie record stores exclusively), Peace Sword (12″ vinyl and CD versions; 5000 standard vinyl copies pressed in Germany), and The Time Has Come To Shoot You Down…What A Sound (Stone Roses debut LP remake officially credited to “Flaming Lips and Friends” and featuring New Fumes, HOTT MT, Stardeath and White Dwarfs, Spaceface, Polica, Depth and Current, Def Rain, Peaking Lights, and Jonathan Rado of Foxygen; 500 multi-color vinyl designs by New Fumes).

That’s six new releases: three 12″ EPs, two 7″ EPs and one LP. Only Peace Sword is being handled by Warner Brothers and is technically a Record Store Day release (set to tie in with a streaming track premier on rsd.com ahead of Black Friday).  The remaining five records, though going on sale in limited quantities the same day, are independent of official Record Store Day events and listings.  Expect some copies of each to sell at select stores November 29th, with additional copies to follow in December.

Artwork, tracklists and other details for each of the 30th anniversary records are outlined below (for detailed posts on each of the other three Flaming Lips Black Friday releases click on their linked release titles above).

The Flaming Lips’ eponymous 1984 debut EP will be re-issued for Black Friday, mostly on translucent green (1000 copies) and red (1000 copies) 12″ vinyl (pressed by A&R Records’ Stan Getz).  A subset of about 100 of these will be special “cerebrospinal fluid inspired” designs by New Fumes packaged in a plexiglass box with the previously discussed white chocolate skull and edible goo brain.  This EP, originally issued on vinyl, has been re-issued before (pressed by both the Lovely Sorts of Death and Pink Dust labels) and also comprises the first five tracks on the Lips’ Finally the Punk Rockers Are Taking Acid 2002 CD box set.

This pressing features new artwork based on the original EP back photo “by freak painter Charlie Immer,” as Wayne put it.  Both are shown below side by side:

Made a batch of cerebrospinal fluid inspired records tonight for the special edition, 30 year… http://t.co/4uHcMT2Xyw

This was literally the first one off the press tonight. Cerebrospinal vinyl #flaminglips #blackfriday http://t.co/FR44dJN66W

Select copies will be released with a skull “all made out of chocolate, it’s a life-size human skull, a life-sized human brain, and the brain is actually sliding out of the skull made with this brain fluid flavored hard-candy,” Coyne told Rolling Stone.

Note the collectable in the red goo beside the brain in the above picture. Coyne described it to Rolling Stone as “a little magic coin inside that brain that you’re supposed to dig out. I think it’s supposed to get you into any Flaming Lips show in the world. I think that’s our intention.”

2000 copies of The Flaming Lips’ first demo tape are also being planned to be issued for the first time as a 7″.  Although it is available as Finally the Punk Rockers Are Taking Acid‘s disc one bonus tracks, it’s never before been released on vinyl (or on it’s own, in any format).  Details concerning its pressing and release are still tentative (it might be clear pink) and this is the least likely of the three 30th anniversary records to be in stores on Black Friday.

2000 copies of The Flaming Lips’ second cassette demo tape will be issued November 29th on blue 7″ vinyl (pressed by Getz).  A subset of about 20 of these will be special designs by New Fumes packaged in a plexiglass box with the band’s “Fuck You Frogs.”  Recorded September 14, 1983, none of the tracks on this extremely rare tape have been released in any form – making this by far the most notable Flaming Lips Black Friday release.

“That is our very first demo that we ever recorded that’s never been released before,” Coyne told Rolling Stone – though actually it’s their second tape. “You get that in this packet. This little frog that’s kind of a recorder that you can manipulate the sound on.”

The “Fuck You Frog” is a “sound recorder and manipulation frog device” originally planned for release in September.  According to the toy’s label “you can use to tell people the stuff you are too chicken shit to say to their face” and it comes “sitting in frog pee flavored hard candy.”  Wayne posted to Instagram on September 16th, “Yesssss!! Available next week!! Only 22 of these have been made and I gave one to Jim James and one to @oddsevans .. so…sheeeesh only 20 now!!!”  He later commented on the same post, “Hmmmm.. Don’t know how we gonna doooo it or how much $$$$$ they gonna be… But they are real cool!!”

Besides Wayne giving them to Jim James, Blackwatch Studios engineer Jarod Evans (@oddsevans) and Tame Impala frontman Kevin Parker, one frog was auctioned by Box of Stars on November 6th – selling in two minutes – and another was auctioned at a benefit for Nevada Hill.  The few remaining frogs will sell for $200 on Black Friday.

Sound recorder and manipulation frog device is almost ready!! Should be on sale in 2 weeks… Limited… http://t.co/t2hOoIAryP 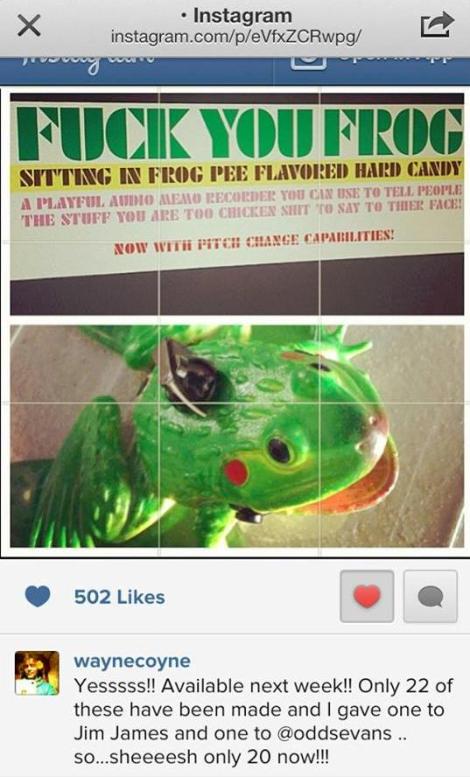 Giving Kevin ( of Tame Impala) one of the Fuck You Frogs!! Ha ha http://t.co/8RzmOtOpgP 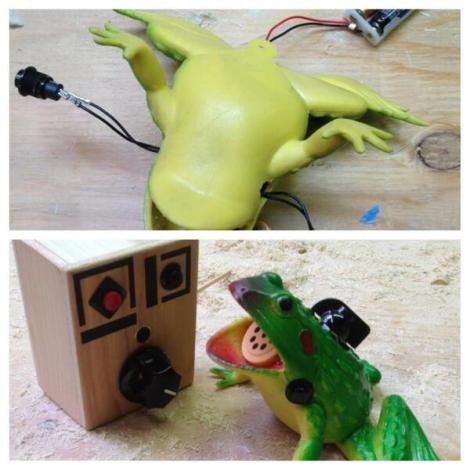 First Fuck You Frog going out to http://t.co/m3KHlyFneN for special auction!!!! See if you can get it!!… http://t.co/CyUP7d4CPs

This Flaming Lips "Fuck You Frog" (only 20 in existence) will be up for auction at the Nevada Hill… http://t.co/4rNt2oWr38