As explained by Womb organizer and co-owner Rick Sinnett  in the first minute of the above video, the psychedelic art gallery he runs with The Flaming Lips’ Wayne Coyne and Jake Harms had big plans for New Year’s weekend.  Acclaimed “thinking man’s” poster artist Emek was scheduled to kick-off the festivities Friday night with his final Poster + Retrospective & Book Signing of 2011. 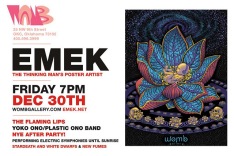 New Year Freak Out festivities all weekend long were set to culminate with a NYE After Party featuring “electric symphonies until sunrise” by New Fumes and Stardeath and White Dwarfs in the wee first hours of 2012 – open to all of the 1,500 fans at The Flaming Lips/ Plastic Ono Band concert.
But as shown from about the one minute mark in the video above until the end  – plans went awry when the Fire Marshall shut down space on Thursday, December 29th….

There have been no reported incidents at previous parties and gallery openings The Womb has hosted since opening this past summer so Coyne’s  initial reaction was understandably confident, “We can work it out“…

UPDATE At 10:40 am on December 30th, The Flaming Lips were still optimistic enough about the opening going ahead to retweet @WombGallery’s new video of the last minute preparations.

Fire Chief Keith Bryant told News OK, the gallery at 25 NW 9 was inspected “after an inquiry by the police department, which was responding to an anonymous complaint about the party…We looked at it from a fire code perspective… the building they plan to hold it in, doesn’t meet current fire codes in terms of public assembly. It’s still listed as a garage. It still needs a sprinkler system, alarms and exits. We visited the building, found out there was a lot of work being done, but no permits pulled out from the city, no permits for a special event.”

Fire Department spokesman Chief Mark Woodard told OK Gazette “They have not applied for a special permit or contacted us to have an assembly there or anything and that’s why the order was issued…a lot of people assembled there, and this building does not meet the code requirements for public assembly.”

Bryant (met) with City Manager Jim Couch and Councilwoman Meg Salyer on Friday morning to discuss the violations, says NewsOK.  “We’ll be discussing any possible alternatives and whether there is any way to do it and make sure we have comfort in ensuring public safety.”

UPDATE – Friday morning, December 30th Apparently the meeting with Couch and Salyer has occurred.  Just eleven minutes after the above optimistic tweet from @theflaminglips, the verdict was implied by a sour twitter update from @waynecoyne:

Rick told The Oklahoman plans are being made to move the after party and art opening to Farmers Market, 311 S Klein.  Directions and info on the market is here.
UPDATE – Friday mid-afternoon, December 30th

The Emek nonstop art show is at 7pm Friday Dec 30.