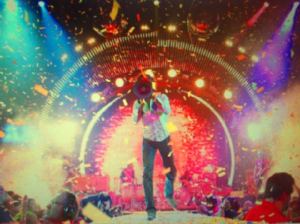 Nathan Poppe has more Freak-Out #4 photos at the newsok staticblog.  That same site also has a review by George Lang, quoted here – newsok.com: “Wayne Coyne did everything humanly possible to wish Oklahoma City and the world a Happy 2011 during the Flaming Lips New Years Eve “Freak Out” at the Cox Convention Center. He performed a wedding ceremony for a couple decorated like Las Vegas Christmas trees. He shot lasers out of enormous hands.

And he and the Lips delivered an unparalleled launch for a new year. This was a show powered by uncommon energy levels and an obvious commitment to showing Oklahoma City how to ring in the new.

From its inception, this year’s “Freak Out” was a different animal. The Lips front-loaded the show with songs from 2009’s “Embryonic” such as “See the Leaves” and the participatory “I Can Be a Frog,” in which Coyne goaded the audience into croaking and meowing along. Those recent tracks blended perfectly with earlier songs such as 1993’s “She Don’t Use Jelly,” in which the band executed its first radio hit with feral intensity.

In past years, the Flaming Lips presented a freewheeling, loosely paced show, but this was not the case Friday night. The performance, streamed online for a worldwide audience, moved swiftly, and even comparatively mellow songs such as “Do You Realize??” were given shots of adrenaline.”

The Flaming Lips had a fantastic year of concerts in 2010, and all eyes were on them deliver an epic show to end it.  They topped Rolling Stone’s “Best Shows, Coast to Coast, to Kick Off 2011” list the week before – over high-profile shows like Phish’s return to MAdison Square Garden and Coldplay teaming with Jay-Z in Vegas – but they proved to all in Cox Center and the global audience watching a webcast that such predictions weren’t just hype.

antiquiet.com: “The Flaming Lips made a spectacular return home to Oklahoma City on New Year’s Eve, ending 2010 and kicking off 2011 at their 4th Annual NYE Freakout. Along for the ride were Stardeath and White Dwarfs, about 30,000 balloons and just shy of 10,000 fans all rabid for the party that the Lips had promised.

Finally finishing their soundcheck/setup, the Lips took to the stage about 10:30. Appearing out of a giant glowing vagina (or a pair of flaming lips, haha) on the screen, the band popped out one at a time before walking to their respective instruments. As the pixelated vagina slowly dissipated, Wayne Coyne appeared once more. This time inside of a giant clear balloon, he rolled out over the crowd, giving those on the floor hope that they would get to touch their beloved Lips leader. It’s become a staple of the Lips’ live show and the fans will seemingly never tire of it.

Coyne eventually came out of his man-sized balloon, and so began the real show. For the next hour and fifteen minutes the band ran through some of their biggest hits, with fan favorites She Don’t Use Jelly and the Yeah Yeah Yeah Song both igniting the entire crowd. Joints blazing and beer spilling, they had no problem slurring out the lyrics with Wayne.

At some point in the show, Coyne and a man dressed in a bear outfit walked out to the main walkway with a couple in tow. Why? They were going to get married right in front of the captive audience. Dressed up in matching Christmas Tree-light decorated outfits, the couple recited their vows and got a ton of applause from the crowd. Coyne remarked that lots of couples have proposed at Lips shows, but this was the first actual marriage. Only one of the many crazy things to happen as 2010 came to a close.

By the time the first set was coming to a close, Wayne announced they had enough time for one more song before the countdown and proceeded singing the first few vocal lines of Do You Realize??. The song was actually selected as Oklahoma’s “official state rock song” a few years back with the state’s governor singing an executive order making it official. The Oklahoma crowd had no problem completely losing their shit over the song, regardless of the fact that Do You Realize?? is actually quite introspective as a song. For those not drunk out of their minds, it was a thoughtful way to end the set; Inspiring those who listened to the lyrics, it was officially the last song the Lips would play in 2010.

This left the band with about 5 minutes to prepare before the countdown started, but someone decided to start dropping balloons early. As Coyne laughingly announced to the crowd, “the balloons just couldn’t wait to join the party.” The crowd didn’t mind one bit that the balloons were early, and proceeded with the largest game of balloon volleyball I’ve ever seen.

Even MTV raved about the Flaming Lips’ highly anticipated NYE show, “Are you still recovering from your New Year’s Eve party? I am. But it’s not because of an epic hangover. Rather, my hands are still sore from all the balloons I tied while prepping the Flaming Lips‘ annual New Year’s Eve Freakout in Oklahoma City. But all the elbow grease and sweat was well worth it, as I was paid for my efforts with a much-coveted “dancer pass,” which allowed me to make the transition from devoted fan to psychedelic participant. (I even got the chance to meet Lips frontman and mastermind Wayne Coyne, which gave me the opportunity to show off my Flaming Lips-inspired tattoo.) With my dancer pass, I transformed into a giant pink butterfly, dancing across the stage with the one and only Flaming Lips.

The Lips have had characters dancing on stage with them for years now, but this time around, there was a garden theme, which featured various butterflies, caterpillars and flowers. As a butterfly, I was rocking an eight foot wingspan, but unlike the other characters, I had wings rather than arms. The get-up didn’t breathe particularly well, so between the sweltering heat, the tiny eye holes and a constantly bobbing head, it was a miracle that I didn’t fall offstage or pass out. I had nightmarish visions of shutting down the whole show by tripping over a cable or knocking over one of the band members.

Luckily, I survived and danced my heart out! When the Lips kicked into “See the Leaves” (my favorite jam from 2009’s Embryonic), I morphed from simple butterfly into an air-drumming butterfly. For most of the rest of the show, I took my role very seriously. During “I Can Be a Frog,” it wasn’t the easiest to mime along with Wayne being a bear, jaguar or monkey considering my attire, but I did what I could. “The Yeah Yeah Yeah Song” was a demanding tune for us dancers, as it has a very fast rhythm (I probably lost a pound or two during that jam alone).”

Paste, as usual, has some of the best coverage – in this case, Mark C. Austin’s photos.  Some highlight are below, but click here for the full deal… 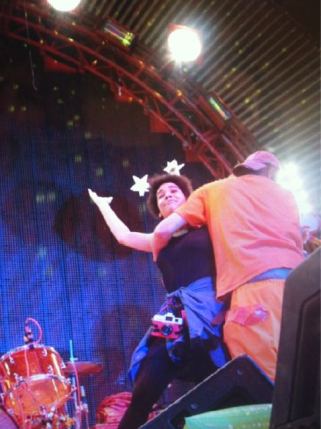 Thanks and LOVE LOVE LOVE to all the volunteers who helped make the Freakout spectacular ..!!!! http://yfrog.com/h35a6jzj

Photo below by Michael Cooper – check out his impressive portfolio at http://www.cooperphotog.net/

Listen to some of the coolest live versions of songs from The Soft Bulletin – here.

Ray Suen is joining The Flaming Lips for NYE.  Learn about him and his Magic Space Harp – here.