In a year marked by deaths of musicians from the relatively young (Prince, Sharon Jones, Phife Dawg, NIN’s James Woolley, Surfer Blood’s Thomas Fekete, P.M. Dawn’s Prince Be) to some of the oldest (Kay Starr died earlier this month at 94; Toots Thielemans was the same age when he passed in August; Thomas Round died two weeks shy of his 101st birthday last month; Ralph Stanley, The Weavers’ Fred Hellerman and Mose Allison all departed at 89 in June, September and November respectively), it’s a relief to remember there are renown musicians active today in their nineties and beyond. At the bottom of this post is a list of the oldest, living music-makers of notoriety – but first a tip of the hat to the artist that tops that list, Viola Smith. She turns 104 today!

After getting her start in the 1920s in the Schmidt Sisters, a family orchestra founded by her father, Smith started the all-woman orchestra The Coquettes in 1938 with her sister, saxophonist/clarinetist Mildred Bartash. Viola turned down an offer from popular big band leader Woody Herman to play in his group Thundering Herd to continue with The Coquettes, but her band disbanded in 1941 and the following year she joined Phil Spitalny’s Hour of Charm, a very successful female orchestra which she stayed with until they broke-up in 1954. With a radio program broadcast nationally every Sunday on CBS (1935, 1946-48) and NBC (1936-46), appearances in movies and later on television, Hour of Charm were so popular from the mid-1930s through the mid-1950s that Spitalny was referenced in an episode of I Love Lucy. (A fascinating, well-researched article on the group can be read here. Sherrie Tucker’s book Swing Shift: All-Girl” Bands of the 1940s, is also recommended both for its in depth appraisal of Spitalny, and the broader context of all-women orchestras of the big band era. Read excepts here). Watch Smith explain her career moves and more in the 2013 interview above. 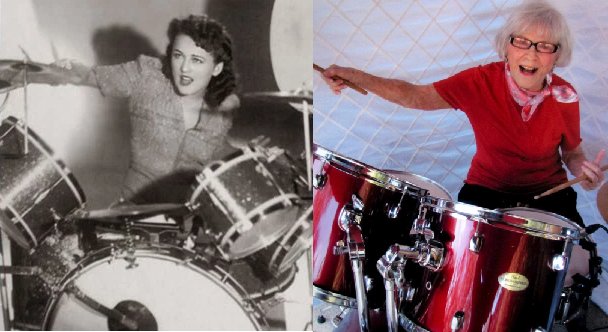 List of the oldest, famous music makers alive today and their birthdates: