Got this cool book for my birthday ..!!! http://yfrog.com/h5srpmtj

Over 50 fans of Flaming Lips’ front-freak Wayne Coyne made a YouTube video as a collective “present” to him for his 50th birthday.

Connecting through twitter.com/FutureHeartDay and psychexfutureheart.wordpress dozens of photos, video and written messages, original art works, and song covers poured in between January 7th and January 12, 2011.  They came from fans spanning five decades in age, in at least four different countries on three continents – see the list below.  The resulting video – with its brain jiggling, kisses, (fake) blood, train crashes, songs about death, frogs, naked harmonica playing and a pink fairy girl skipping down the street – was the  perfect concoction to tribute Wayne on his big day.
(Click here for the original “birthday video request” post explaining the project).

On January 13th, Wayne’s 50th birthday, the video was tweeted at him – and people he personally knows (three of which replied that they would make sure he saw it)… and he did (proof in the photo at the bottom of this post).  He also sent two direct messages to twitter.com/FutureHeartDay in thanks to all who participated.  The second message reads, “To know how much I am loved…!!!! I hope I am worthy …” 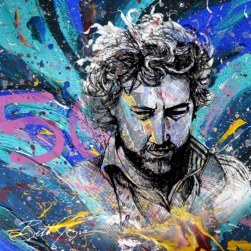 Happy Birthday to @waynecoyne – over 50 fans made this for you. We hope it inspires you like you inspire us!! http://tinyurl.com/4dux8ub

Our video isn’t much compared to all Wayne has created, but hopefully – to him and all others that watch – it represents the same “collective triumphant of the human spirit” that he’s expressed with The Flaming Lips for the majority of his 50 years.

With the contagiousness of inspiration, a million really can come from one!

(Wayne Coyne blood birthday photo above by Sara Reynolds, portrait by the super talented Aerocat aka Beth J.; below pictures from Wes W. and Miss Purdy)

“Thanks for all the love and freakouts you given! Happy Birthday!!” – Wes W. from the mountains

For more information, check the description box in the video at http://www.youtube.com/user/psychexfutureheart.

In the early hours of his birthday (late the night before in other words, after tweeting a video of himself in a bathtub with Steven Drozd and four iPhones) he wigged out… 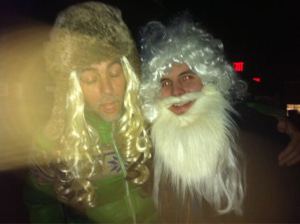 The next day, hundreds of fans tweeted #happybirthdaywayne messages at Coyne.

Hey everybody… Wayne's turning 50 today. Let's see if we can crush his Twitter account with birthday wishes!! @waynecoyne 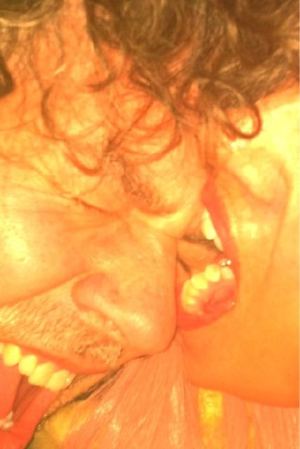 Wayne tweeted “thanks” on his birthday with pictures of kisses, as well as an open invitation, “Hey… We are getting together at The Blue Note tonight at 9:30 for some birthday cake.. All humans of drinking age are urged to attend..”

…but Wayne’s plans for the Blue Note (“one of OKC’s oldest yet still rockin’ bars” and the site of the first ever Flaming Lips gig) were scrapped (and that tweet deleted) when his wife, Michelle, threw him a surprise party at the HiLo (a gay bar in Oklahoma City renown for local music, drag queens and boasting the best martinis, margaritas and Bloody Marys around).

All indications from various twitter accounts there suggest it was quite a party: drag queens, weird gals, vikings, goats, bondage rabbits, a pig’s heart and karaoke (Wayne is no stranger to karaoke – click to see him duet on Meatloaf’s “Paradise by the Dashboard Light”). 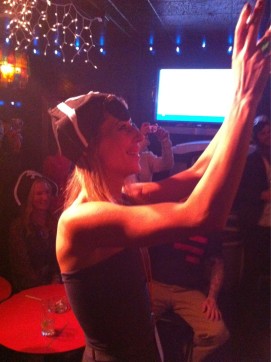 thanks @KliphScurlock I'm soo glad you made the drive down… You were born a Viking?

Two weird gals and a bondage rabbit at my birthday party http://yfrog.us/catwqz

@waynecoyne I hope you had a great one, sir. And @mzmartincoyne pulled off an incredible feat! Also, I suspect there were many casualties. ?

24 hours in bed… My back hurts! Hair Peace must have been a motherfucker on John's lumbar region!

The @waynecoyne birthday week continues to be a success. http://yfrog.com/h4eqebj

Got this one too… Sam Harris and Syd Barrett…would have been cool if they knew each other http://yfrog.com/h2f9hdfj 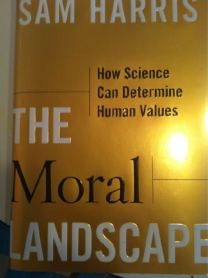 Doodled up the newest from ol' Sam while doing an interview about 20 years since Nevermind by Nirvana http://yfrog.com/h2eqnpdj 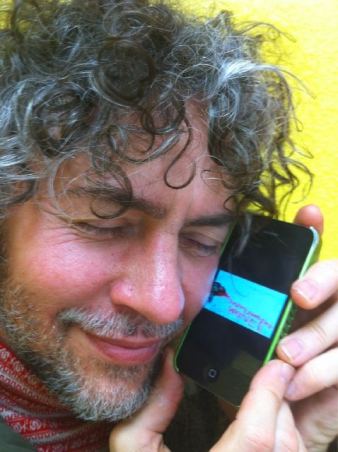 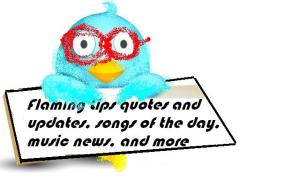 Pictures, video, reviews and more from The Flaming Lips 2011 New Year Freak Out!

From Akon to Wayne Coyne: The Year in Bubble Walking…

Wayne and Steven work on music for four iPhones

Steven Drozd’s score for The Heart is a Drum Machine released by Twinkle Cash Company… finally!