The Claypool Lennon Delirium covers Pink Floyd​, King Crimson​, The Who​ and Flower Travellin’ Band​ on a new four song live EP titled Lime and Limpid Green and it lives up to its name: it’s being released on mixed bright green vinyl 10″ (as teased by the band on social media today). The evolution of humanity art on the cover – from chimp to robot to burning toast – is reason enough to want to own this: 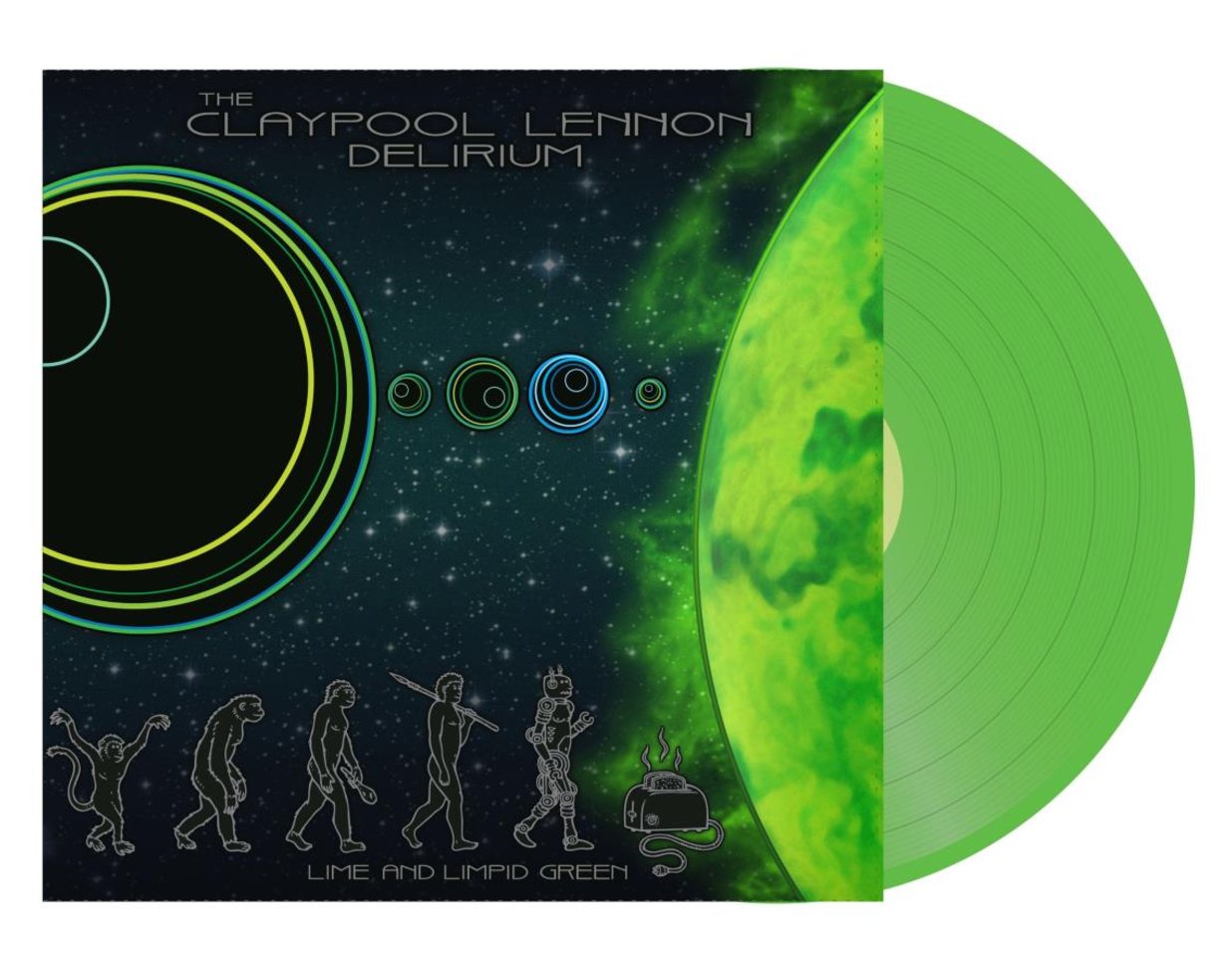 Being this is a live EP and there’s several professionally filmed Claypool Lennon Delirium shows on YouTube, we can preview the entire EP sans “Satori” (which there’s no record of them ever playing live, suggesting this track was perhaps recorded especially for the EP either at a soundcheck, a rehearsal or in the studio).

For many live music fans and festival freaks The Claypool Lennon Delirium were the most exciting new group on the touring circuit last summer. And if you saw them perform you almost certainly saw them cover this Floyd classic – the opening track of their 1967 debut LP The Piper at the Gates of Dawn – as this and their original tune “Cricket and the Genie (Movement I, The Delirium)” were the only songs they played nightly. As such it’s also the group’s most covered song to date (only their take on another Lennon’s “Tomorrow Never Knows,” typically their set closer or encore, came close to being played as frequent). Watch stellar versions recorded in the SiriusXM studios last June for broadcast on “The Jam Files” and at Outside Lands 2016 in Golden Gate Park, San Francisco on August 5, 2016 below. Also worth checking out: this version from their break-out appearance at Bonnaroo (in fact it’s the full set, but the link opens directly to “Astronomy Domine”), this version from Philadelphia’s Fillmore on August 31st (again, the full show but the link opens on “Domine”) and this version from Boston’s House of Blues on August 26th (full show is here).

The Who “Boris The Spider”

Among the earliest songs written by Who bassist John Entwistle, “Boris the Spider” was frequently played at Who concerts from 1967 until his 2002 death – making it, along with “My Wife,” a go-to track for The Ox to step up front. No wonder then Les Claypool – being the bassmaster that he is – would want to cover it, though he hasn’t much: to date just once solo (Hopmonk Tavern in Sebastopol, California on November 20, 2016) and a second time with the Delirium (at Oakland’s Fox Theater on New Year’s Eve, the night’s sole live debut). It’s thus almost certainly this performance on the EP (and if they were indeed recording this show the Floyd and Crimson covers on the EP might also be from it). Unfortunately pro-shot footage isn’t available, though a fan video of the entire concert is. Press play below to start the video at the start of “Boris” (circa the 57 minute, 36 second mark):

King Crimson – The Court of the Crimson King

Although “The Court of the Crimson King” – the epic closing track from King Crimson’s classic 1969 debut LP – wasn’t live debuted by The Claypool Lennon Delirium until mid-summer, it immediately entered regular rotation in their setlists and became a highlight, played in the middle of the shows almost nightly. As with the second “Astronomy Domine” video above, the version below was also recorded at San Francisco’s Outside Lands 2016 on August 5, 2016. Also worth checking out: this version from Philadephia’s Fillmore on August 31st (in fact it’s the full show, but the link opens to “Court”) and this version from Boston’s House of Blues on August 26th (full show is here).