Birdflower’s new music video “Crystalize My Heart” lifts off at 1′ 36″, like a magical blast into some distant, fantastic galaxy. Its unique blend of sounds provoke flashes of mutant images through my mind, and then, before I can start making sense, the song is over. I’ve returned to Earth.

Daniel Huffman – one half of Birdflower but better known as New Fumes – recalls working on the track. “It was one of the last ones we recorded,” he tells The Future Heart. “It came together pretty quickly in one night recording in Wayne [Coyne’s] living room. A couple months later, Wayne encouraged me to put some chords over the pretty naked bassline and have Steven [Drozd] play something pretty.”

“Like Daniel said, it came together pretty quickly,” adds Brooke Kelty, the duo’s other half. “As the album went on I became more and more comfortable writing lyrics and coming up with parts. The entire process of creating this album has been a huge learning experience for me. I have grown so much as a person and an artist from learning to free myself through Birdflower. I feel like this song came more naturally for me because I had a clearer vision in mind. This is definitely one of our less playful songs, but I like that. It brings some seriousness to the body of work. It was a year ago, early November. I just got back from a weird weekend love affair in LA. I was still buzzing from that, but I kinda felt like he was trapped inside of my head. For me to get him out I had to put him into that song.”

As for the video: “Daniel did all of the work on the videos,” says Brooke. “He’s such a badass.”

That “something pretty” Steven added to the track has been dubbed a “crib mobile arpeggiator” by Daniel. “I just called it that spontaneously because it sounds to me like the music from a mobile you find in a baby’s crib. I think it’s really pretty and hypnotic… makes me feel like a baby.”

“Crystalize” is the second tease of the duo’s as yet untitled debut LP, following last month’s “Bish At The Beach” video. “The album has 9 songs. I don’t know the exact date of the record coming out,” Daniel says. “I imagine it will be talked about very soon.”

In the more immediate future Birdflower is featured on The Flaming Lips’ With a Little Help From My Fwends, a collaborative remake of The Beatles entire Sgt. Pepper’s Lonely Hearts Club Band album. In the 9th video of the official 14-part series on the making of the album Daniel appears a bit overwhelmed by tipping the sacred cow, delusionally so:

“Ringo Starr texted me. And he’s hanging out with Paul McCartney in some castle somewhere. And Paul has his panties in a wad. Somehow they caught wind I was making ‘Within You Without You’ made entirely of drums. And Paul is making Ringo text me all this shit about, ‘George is rolling in his grave. He’s going to come haunt you…’

What are we going to do? I can’t have fucking George Harrison haunting me. I can’t handle that right now.“

Kidding aside, Daniel explains how The Beatles cover actually came together at sessions this past January before any other “fwends” had been invited to the project. “Brooke and I were working at Pink Floor one night, then Wayne showed up and said ‘I want ya’ll to cover ‘Within You Without You.’ He had told us that he wanted to do this album and they had already been making, or made ‘Lucy.’”

Last spring they befriended Morgan Delt and added him to the track. “I heard about Morgan’s music through Oliver Hibert,” Daniel says. “I ended up really loving that album and ended up playing a show with him in Fort Worth. I think it was their fourth show ever. They stayed at my house that night and we talked about having him do something with our version of the song. He did some cool stuff and made his own mix. Wayne and Dave [Fridmann] did the final mix and sped up the tempo.”

“My range isn’t as great as it used to be,” Brooke says. “When they put Morgan’s vocals in with me for the first mix I hated it. I sounded so raw and vulnerable. Morgan’s voice blended so well. I felt like mine stuck out so strangely. I felt naked. Then Dave sped it up and maybe did other things to the track. After listening to it a few times and much reassurance from Daniel, I fell in love with it.”

“I’ve always felt particularly drawn to George Harrison,” Brooke says. “When Wayne asked us to do ‘Within You Without You’ I couldn’t have been more pleased or excited. Recording and performing it has brought me so much closer to his message. I think it’s something that people needed to hear then and now. This song makes me so emotional now…in a way it never did before. In the long instrumental part in the middle I always initiate a group hug when we’re performing. I want to share love with everyone around me. It’s crazy how beautiful and emotional a simple group hug can be. To me it’s so powerful. We performed it in Austin last month for a Weird Destiny party, and I instantly started crying when I started singing. The happiest moments of my life are performing for people, especially such people as Love Pit [a group of Flaming Lips fans]. I felt so blessed and happy that I was around these people who really understood the song and the meaning behind it. I mean, on the other side of the world people are being murdered, kidnapped, and taken as sex slaves by IS, but I was there in Austin, Texas singing this Beatles song with people who love me. ‘With our love, with our love, we can save the world.’ The song has changed my life so much. It has made me a more loving, conscious person. If you meditate on this song and its message I think it could change your life too.“ 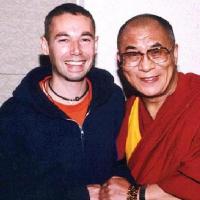