March, 31st 2014 – (Burbank, CA.)
THE FLAMING LIPS continue to explore the rich world of PINK FLOYD with their new digital release, FLAMING SIDE OF THE MOON.

Designed as an immersive companion piece to the original 1973 album, DARK SIDE OF THE MOON, listeners are encouraged to listen to the new LIPS album while listening to DARK SIDE at the same time. FLAMING SIDE OF THE MOON was also carefully crafted to sync up perfectly with the 1939 film, THE WIZARD OF OZ. For ideal listening conditions, fans are encouraged to seek out the original Alan Parsons’ engineered quadraphonic LP mix of DARK SIDE, but it will work with the album on any format. Available now through all participating digital outlets.

A limited edition 100 vinyl copies will be distributed to friends and family of THE FLAMING LIPS.

Much more LIPS information to be announced soon.
Until then go to www.flaminglips.com

So…
…an album designed to be listened to while watching The Wizard of Oz and listening to Dark Side of the Moon. Far out man!

Except it seems more like an April Fools joke than an actual album. Let’s weigh both sides. What do you think?

Reasons The Press Release Is Plausible 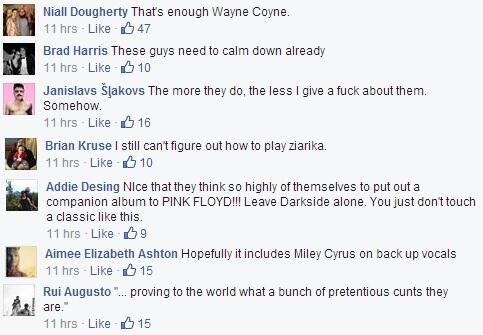 Why don't The Flaming Lips do something really bold and release an album of listenable music?

Someone stop the flaming lips. Thank you good morning.