“We didn’t know if we’d ever get another chance to play in a cemetery so we thought we would make the most of this simple statement that I feel like the more we realize – that even this moment that we’re having here – is kind of a special, temporary thing, the more we’re able really to cease this thing and say let’s make it good, let’s make it meaningful and share it with our friends… and let’s be glad it didn’t fucking rain…”

Watch the bells ring and Wayne banter “Do You Realize, Morning Rendition” at 6:49 in the video below, subscribe for more videos here and follow the latest updates at twitter/FutureHeartDay!

When Wayne Coyne tweeted a video of himself at The Alcove of Devotion inside Hollywood Forever Cemetery in February (watch it in the first 15 seconds of the above video) – noting he was “Gonna try and do a Flaming Lips show there” – the idea of The Flaming Lips actually playing in this graveyard almost seemed too weird to be true – even by Flaming Lips standards.  But alas, by early April he had a psychedelic poster circling the web – a topless woman holding a skull in one hand and shooting a rainbow out of the peace sign she made with her other (see it and Wayne’s tweets at the bottom of this post) – announcing not just “a Flaming Lips show there” but three of them… over “two nights, one morning”…

In many ways, the combination of these two shows is the culmination of every alteration and addition The Flaming Lips have made to their live show this entire year.  But what makes this so special to so many isn’t just that it’s an ambitious concert undertaking – demanding the band be at the peak skill, creativity and work ethic – it’s also the weighty, timeless, epic albums they picked to play and the decision to perform them on back to back nights in a cemetery!

To paraphrase Wayne’s own words from this morning – this is truly something special to be shared with friends.  After all, it’s true: everyone you know will die…

On top of all this, last night also saw the release of a very limited edition Soft Bulletin – live Gummy Song Skull: a strawberry skull with a marijuana-flavored brain containing The Soft Bulletin recorded live (at a secret location), “a unique playlist” and music videos for live versions of “Race for the Prize” and “What Is the Light” (recorded at SUNY Fredonia).

Can someone coming to the Lips show tonight bring me some green facepaint? Please. Just tweet me when u get here. #wickedwitch

So now that they’ve asked “the biggies” about love and loss with The Soft Bulletin…
…and played a touching, bell-enhanced, sunset, cemetery version of “Do You Realize???  – what can we expect for tonight?

A once-in-a-lifetime graveyard freakout unveiling their new Dark Side of the Moon / Wizard of Oz arrangement – with its familiarly big questions about sanity and death.  Peaches will guest, screaming the lead on “Great Gig in the Sky” (as she did on The Flaming Lips studio version of that song, but never before in concert) and it will be unlike any time they’ve ever played the Floyd milestone before (literally, the two times they performed the classic live in 2010 they did so with Stardeath and White Dwarfs – now the Lips have re-arranged it without Stardeath… but with plenty of Wizard of Oz references visually and musically).

Wayne to The Quietus: “Last summer we were playing some versions of Dark Side of the Moon that were more like our versions, that we did with my nephew [Star Death and White Dwarves] and Henry Rollins and Peaches. This summer we’re playing another version that has some of the Wizard of Oz themes and ideas running through it, so that’ll be a lot of fun.”

More photos from this morning and bell tower info below:

In case you’re wondering, here’s a little background info from hollywoodforever.com, “Hollywood Forever is a cemetery unlike any other in the world. One of the world’s most fascinating landmarks, Hollywood Forever Cemetery is the final resting place to more of Hollywood’s founders and stars than anywhere else on earth. Founded in 1899, the cemetery was an integral part of the growth of early Hollywood. Paramount Studios was built on the back half of the original Hollywood Cemetery, where the studio is still in operation today. The cemetery of choice for most of the founders of Hollywood’s great studios, as well as writers, directors, and, performers, Hollywood Forever Cemetery is now listed on the National Register of Historic Sites. Visitors come from all over the world to pay respects Johnny Ramone, Cecil B. DeMille, Jayne Mansfield, Rudolph Valentino, Douglas Fairbanks, and hundreds more of Hollywood’s greatest stars.”

Flaming Lips setting up for "Do You Realize" in Cemetary Belltower with Edward Sharp in a few minutes. Steven D spotted http://tiny.cc/xco67 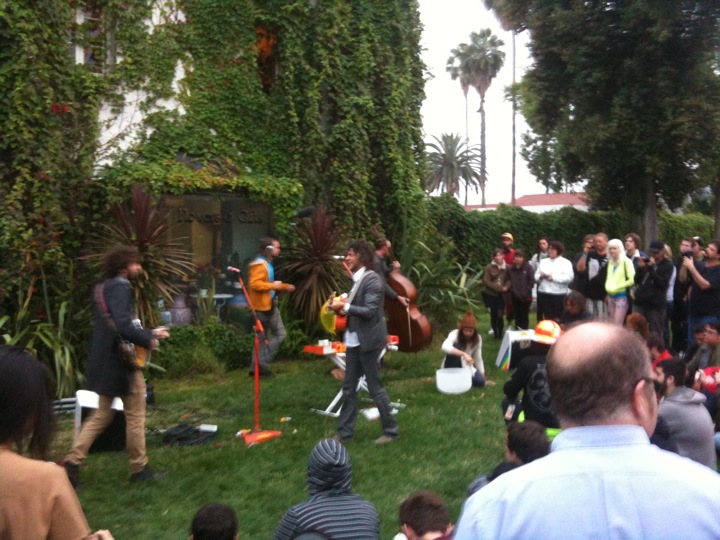