“It’s going to be an eventful weekend in Oklahoma. People from outside our state have a good reason to visit and see how Oklahoma has emerged as a creative hub for music, art and creativity.”
– Robert Ruiz, NMF committee chair

The fourth annual Norman Music Festival is Thursday, April 28 through Saturday, April 30, in Norman, Oklahoma’s historic Downtown Arts District on Main Street.  For the first time it will be a three day festival (actually, two nights and one day), and it’s also the first year it will feature over 200 artists.  The Walkmen are scheduled to headline and the rest of the bill runs like a who’s who of Oklahoma talent (and beyond): Stardeath and White Dwarfs, White Denim, Colourmusic, Keller Williams, Black Joe Lewis & The Honeybears, Ty Segall, Penny Hill, Beau Jennings, The Pretty Black Chains, Native Lights, Chrome Pony, Gentle Ghost, Brine Webb, Kite Flying Robot, Rainbows Are Free, Student Film, Depth and Current, Locust Avenue and DEERPEOPLE.

Get a free Norman Music Festival app at iTunes!

This is my favorite weekend of the year! Love NMF!!!

Heads up y'all! We will be playing this years Norman Music Festival! We are playing with White Denim, on Friday… http://fb.me/Z72uHfD0

Hosted by the Norman Arts Council, the entire festival is free and welcomes the public.  Note that the original announced dates (April 21-23, i.e. the three days leading up to Easter Sunday) have been moved up a week.  The first two nights are mostly indoors but Saturday hosts performances on a variety of outside stages – including one that’s a $1 million custom-built hydraulics fold-out platform –  as well as in the Sooner Theater and other locations – a full on local celebration…

And who knows, though The Flaming Lips are playing Memphis that Friday, you might see various members walking around the other nights, ala last year:

Wayne Coyne is at The Non! @FlamingLips @NormanMusicFestival

Got word Wayne Coyne has made an appearance at The Non's show at Sooner Theatre, w00t! #NMF

@waynecoyne @theflaminglips Wayne Coyne, heard you're at #NMF if you come by MainSite we'll give you a VIP Pass! 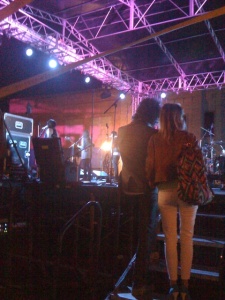 Just got an interview with Wayne Coyne from @theflaminglips!!! Rock on my little NMF-ers! #NMF

Chased down Wayne Coyne at Sooner Theatre and got an amazing interview. Look for it soon on our YouTube channel. @normanmusicfest

NMF Wrap-Up Part 1: Wayne Coyne, fowlervw.com: ”We took lots of great videos at the Norman Music Festival this year and wanted to kick off our NMF wrap-up with Wayne Coyne.

We sort of stalked Wayne Coyne at The Non’s NMF show. We got word he was at the show, rushed to the Sooner Theatre, spotted him in the audience, didn’t let him out of our sight, and then followed him backstage after the show. He was gracious and eloquent and our favorite interview of the day.

Side Story No. 1 — The beer came from his wife Michelle’s purse.

Side Story No. 2 — Wayne and Michelle wanted backstage during the Dirty Projectors’ show, but security didn’t recognize Wayne. Fowler VW GM Jonathan Fowler saw it all go down, so he went over and let them in. A few days later, Wayne ends up sitting next to Jonathan and his family at a Thunder playoff game and Wayne comes up to him and shakes his hand. It made Jonathan’s year.

Side Story No. 3 — Security also didn’t recognize Dirty Projectors frontman Dave Longstreth, so they kicked him out of the backstage area. Jonathan rushed over and gave Dave his all-access pass. Then security tried to kick Jonathan out. It took some pleading, but the walkie talkie and NMF staff t-shirt finally convinced them.”

had the best conversation with Wayne Coyne. We hugged. Ya. 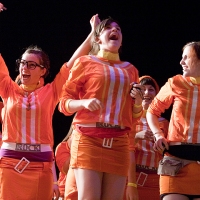 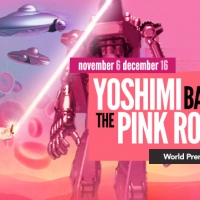 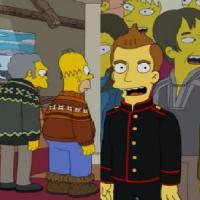