With the above in mind it’s easy to immediately dismiss On Air – Live At The BBC Volume 2 as another udder on the music industry’s biggest, decades-long-lasting cash cow.  But unlike the mere repacking that characterizes most of the aforementioned albums, this new release gives genuine reason for Beatle fans to be excited.

Paul: “We’re going for it, not holding back at all, trying to put in the best performance of our lifetimes” http://t.co/ypEbuMxBGR

“What we generated was fantastic when we played straight rock and there was nobody to touch us in Britain,” John Lennon told Rolling Stone in 1970 of The Beatles early years. “As soon as we made it, we made it, but the edges were knocked off.  You know Brian put us in suits and all that, and we made it very, very big. But we sold out, you know. The music was dead before we even went on the theater tour of Britain. We were feeling shit already, because we had to reduce an hour or two hours’ playing, which we were glad about in one way, to 20 minutes, and we would go on and repeat the same 20 minutes every night.”

Though all On Air – Live At The BBC Volume 2‘s tracks were recorded after the period John was speaking about, the BBC tapes come closer to documenting the excitement he refers to than any other recordings.  Not only did the Beeb capture spontaneity missing from the official masters of these same songs (that is, when they recorded in the studio at all), and in better sound quality than the live bootlegs of early Beatles concerts to surface over the years, but the BBC essentially forced The Beatles to dig deeper into their repertoire than they had anytime else since leaving their hours-long sets behind.  As a result, the group recorded 88 songs for the BBC, some multiple times.  Only 56 were included on the 1994 set however, which explains the new set. 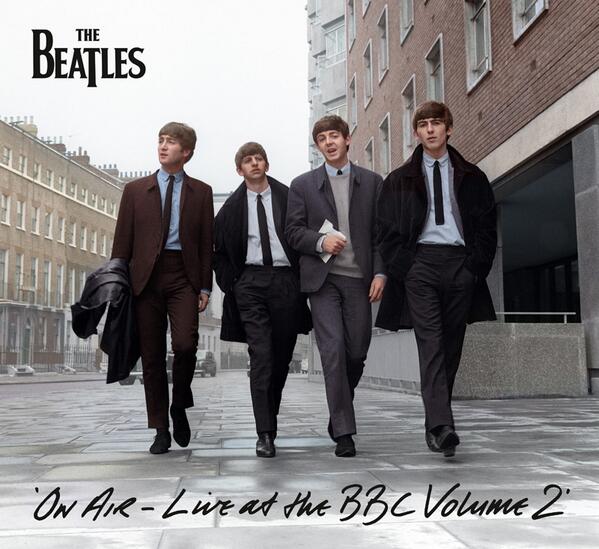 March 7, 1962 was The Beatles’ first BBC appearance (on the series Teenager’s Turn—Here We Go); the special The Beatles Invite You to Take a Ticket to Ride, recorded on May 26 1965, was the last.  Between these two programs the band appeared 50 other times, totaling 275 performances.  In 1982 the BBC began broadcasting yearly radio specials featuring these recordings, spawning numerous bootlegs, most notably 1993’s The Complete BBC Sessions (a nine-CD box by the label the Great Dane in Italy, where copyright protection for the broadcasts expires after 20 years).  In fact, it was the popularity of The Complete BBC which led Apple’s own 1994 release.  The official Live at the BBC was limited by design to just two CDs worth of what EMI considered essential though.  Great Dane’s Complete BBC was also incomplete (239 performances, some of poor quality, plus several outtakes) though it was (and remains) the set for fans that want to hear virtually every show including the between-songs banter in chronological order.  Live at the BBC aimed to cut out the unnecessary repeat performances, lesser songs and poor quality tapes but in doing so upset fans by omitting not just rarities but even sought out alternate version of some of the band’s biggest early hits (“Please Please Me,” “She Loves You,” “I Want to Hold Your Hand” and “Twist and Shout”).  The new set corrects this with inclusion of all of the previously snubbed hits plus obscure covers (“Lend Me Your Comb” and a lively take of the standard “Beautiful Dreamer,” the latter never released in any form).  Most significantly On Air – Live At The BBC Volume 2 adds Chuck Berry’s “I’m Talking About You” – a.k.a. the song Paul stole the bassline for “I Saw Her Standing There” – to the Beatles official discography (previously only available on bootlegs and the semi-unofficial release Live! at the Star-Club in Hamburg, Germany; 1962).

Glimpse the packaging below, followed by excerpts from the press release and the full tracklist.

“Thrilled to hear these exciting recordings again, Paul McCartney said, ‘There’s a lot of energy and spirit. We are going for it, not holding back at all, trying to put in the best performance of our lifetimes.'”

“Ten of On Air’s songs were never recorded by the group for EMI in the 1960s, including two making their debuts with the new release: The Beatles’ direct-to-air performance of Chuck Berry’s ‘I’m Talking About You’ and a rocking cover of the standard ‘Beautiful Dreamer.'” On Air also includes different versions of six rarities heard on the 1994 BBC collection: Little Richard’s ‘Lucille,’ Chuck Berry’s ‘Memphis, Tennessee,’ Chan Romero’s ‘The Hippy Hippy Shake,’ Ray Charles’ ‘I Got A Woman,’ and two songs they learned from records by Carl Perkins, ‘Glad All Over’ and ‘Sure To Fall.'”

“The group played songs on 39 radio shows in 1963 alone. Ringo Starr said in 1994, ‘You tend to forget that we were a working band. It’s that mono sound. There were usually no overdubs. We were in at the count-in and that was it. I get excited listening to them.’ On their busiest BBC day, 16 July 1963, The Beatles recorded 18 songs for three editions of their Pop Go The Beatles series in fewer than seven hours.”

“The group played 88 distinct songs in their BBC sessions – some were recorded many times; others performed just once. At the time, three national BBC stations provided all daytime radio broadcasting in the U.K. Only the Light Programme network might occasionally play a record. Most broadcast music was live music. Consequently, to promote their releases, The Beatles had to play live at the BBC. ‘Everything was done instantly,’ remembered George Harrison, ‘But before that, we used to drive 200 miles in an old van down the M1, come into London, try and find the BBC and then set up and do the program. Then we’d probably drive back to Newcastle for a gig in the evening!'”

The Beatles: On Air – Live at the BBC Volume 2 Tracklist