Electronic psych one-man-band New Fumes will play tonight at Canton Co-Op in Dallas.  New Fumes recorded a new cassette EP last weekend, Panthers From Your Mind and – timing permitting – it will be released at tonight’s show.  Panthers contains two, lengthy tracks: side A is “Snail Razor Panther Mind”, side B is “Snail Drumless Mind”.  All in all words really can’t describe it – you have to experience it for yourself (the operative word being “experience”).

Just finished recording and mixing a new (long) EP. Gonna try and have a few copies for you at the show this Sunday. Ltd cassette w MP3 DL .

This is the type of the music to let wash over you as you relish the sounds within (like a hiker stopping to smell exotic plants or an art-goer examining the exact colors in the strokes that collectively make-up an abstract painting).  That said, I will attempt to provide some vague idea of what the EP sounds like by outlining “Snail Razor Panther Mind”.  Over 27 minutes of psych textures, electronic noises, audio collage loops, and guitar sounds, “Snail Razor” has a conventional rock song (relatively speaking!) hidden in its middle.  The center tune kicks in shortly after the twelve minute mark and about two minutes later the drums drop out as it collapses into a beautiful, lush (yet sonically edgey) psych exploration.  The remainder of the track gradually builds up from wind-like noise to a wall of guitars.  This EP is recommended for fans of noise psych, avant rock and The Flaming Lips recent work (especially the Prefuse 73 EP, which he personally pressed one-by-one).

New Fumes (aka Daniel Huffman) first made his name in psych circles in the mid-’90s with Comet (sample review from All Music Guide: “Though David Baker‘s production inevitably leads to Mercury Rev comparisons, on Musings, Comet isn’t quite so wild and wired as that band in its early days. Instead, there’s a post-psychedelic wistfulness that tends to suggest instead groups like the Flaming Lips or, at least in the vocals, Built to Spill…There are definite hints of overdriven shoegaze drone being part of Comet‘s formative years, as well..”).

Since then, he’s played with various peers in various groups (the improv-based Ghostcar, and Texas psych supergroup Day of the Double Agent among them), but his newest bandmate is his laptop.  Gigging under the name New Fumes, he sings, works electronics and plays guitar in a sort of Black Moth Super Rainbow meets early ’90s Mercury Rev daze of noise, technology and mind-warping sonic imagery.  Get a taste of the trip with the video sampler above, and then watch the full music videos it’s made from (with these links): “Teeth of the Sun“, latest single “Your Style Won’t Save You Now” and “Millenium Crux“… plus others at vimeo.com (including the visuals he made at Tim Delaughter’s request for Polyphonic Spree).

klli.radio “New Fumes, who I saw open for the Octopus Project recently, kicked off the show and it was a solid performance.  One man bands often look lonely on a large stage but the gigantic screen and intense images behind him filled in the gaps effectively.  If you are into electronics, mixed media or have ever wondered what a Radio Shack “sounds” like… New Fumes is your new favorite band.”

For the latest New Fumes happenings and recordings (free downloads, yeah!) visit his website…
…home to commentary like this (about his February 3rd gig opening for The Flaming Lips and his limited edition Good Records vinyl, Bump Assassination released the same day – screen-printed cover pictured below):

“That Flaming Lips show was a Blast! And that snow! Crazy!
That morning and the previous afternoon, for me, was spent at the record plant putting colored vinyl chips and beads into the vinyl pressing machine.
I could have spent all day doing that! It was so fun to experiment.
I came out with some interesting results, i think.
The first 100 copies of the LP come with a CD of the music as well.
I just want to say that I have much love, respect and appreciation for Wayne Coyne and the Flaming Lips organization as well as Tim Delaughter and the Good Records organization… they have helped me so much and been so encouraging. Good and Funny people.. i love em!
You can purchase the LP here”

Doodled this while listening to New Fumes vinyl… http://twitpic.com/3x5e7l 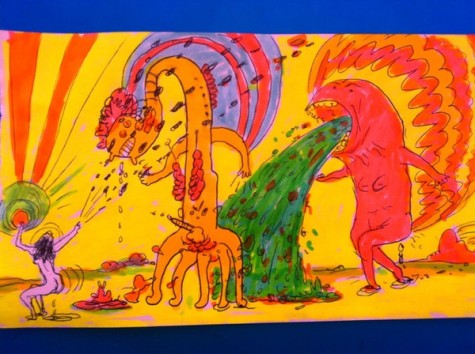