Ray Suen – aka Ray Ray Agogo, aka the guy that banged the gong all the way through “Watching the Planets” when the Flaming Lips played on Late Night with Conan O’Brien – rejoined The Flaming Lips for their New Year’s Eve 2010-2011 performance of The Soft Bulletin.  Ray was brought in to help the Lips recreate in concert their densely overdubbed classic album, playing a variety of instruments including violin, keyboards, timpani and gong.

Ray also played with The Flaming Lips on Yo Gabba Gabba – filmed in October 2009 (though not aired until a year later) – but prior to New Year’s his work with the Lips in concert was limited to the two TV tapings circa the release of Embryonic.  Since then he has joined them several times to play Bulletin – most recently February 21, 2012 at Noise Pop.

any harpists out there wanna give me a crash course in…harp? bonus q: could one of you disprove my theory that you're all thin and blonde?

Found a harp guru (not blonde or female). First harp lesson today. Mentally steeling myself against total and complete humiliation.

Verdict: Harp, you ain't so bad!

I feel about as ridiculous as I look. #harping http://twitpic.com/3e4txu

Does anybody have a harp they could loan or rent us? We want/need it from this Tue until the New Year's Eve Freakout. @KliphScurlock

Off to OKC for a minute. Looking forward to seeing some old pals and exploding some brains.

Harps feed back too easily.

No getting around the gong. http://twitpic.com/3gl8t0 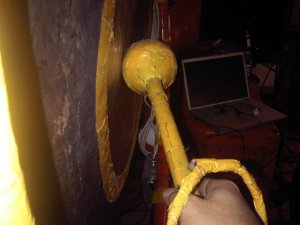 My station is hilarious. http://twitpic.com/3h7lix 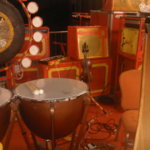 New Year's Conundrum: How much Sonic can I eat in Oklahoma without keeling over dead before 2011? #criticalmass

Oklahoma is apparently the birthplace of not only Sonic Drive-ins, but also parking meters and chicken-fried steak. Also Kristin Chenoweth.

@rayrayagogo and upside down Texas Longhorn stickers. That never ceases to amaze me

This harp is starting to change. http://twitpic.com/3l8iau 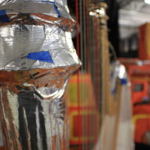 For songs of the day, music news, Flaming Lips quotes and more follow at twitter.com/FutureHeartDay