Thanks to all that took part in the Imagene Peise/ Flaming Lips’ Christmas covers request poll!

Having tallied 257 votes, the winner is…

No surprise – who doesn’t love the Vince Guaraldi Trio and the Plastic Ono Band come December…
Needless to say, both are particularly fitting to be re-imagined by Imagene Peise. 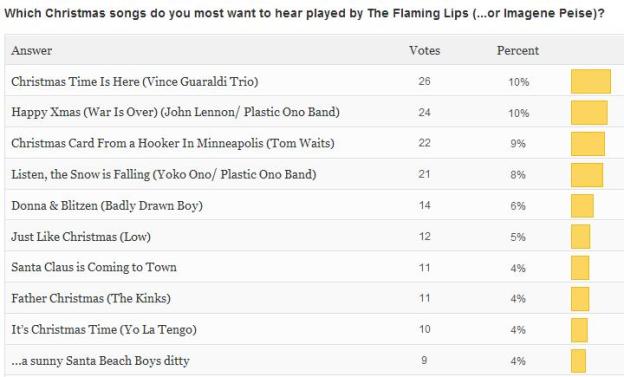 The top ten is above, and the long tail is below.

A few notes – I deleted Bjork’s “Jólakötturinn,” Sigur Rós’ “Ég fæ jólagjöf” and “Jingle Bells”  from the poll.  The latter because it’s the interlude of “Christmas Laughing Waltz” and the former two because they’re too esoteric.  I should have left them off to begin with… and instead included Sir Macca’s “Wonderful Christmastime” (which received two write-ins and presumably would have been voted on by others if a choice)…

This poll is now closed, but there are two other related polls below. Vote and click on the “Share This” icon at the bottom of each to spread it on your preferred social media sites… 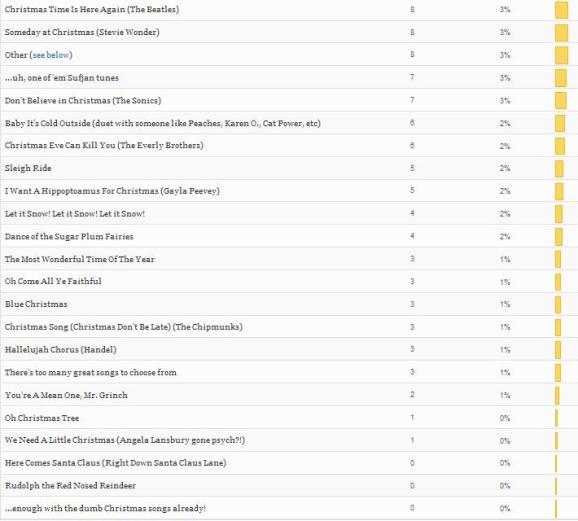