“My life as a professional musician is a joyless exercise in futility,” he said in the 2012 Financial Times interview that announced his “retirement.” He explained, “I couldn’t concentrate on music, so I made the choice to give up my career as a musician in the frontline to deal with the business,” referring in part to fallout from the various record labels King Crimson were signed to being acquired by Universal Music.

Ever suspect of the ways of the music industry (“the greater the success, the greater the pressure to keep repeating yourself”), Fripp had deliberately avoided major labels since the 1960’s and founded his own Discipline Global Mobile in 1992. “Going back to the early King Crimson, the remarkable explosion of the creative impulse in popular music, mainly in rock music, came from these young men who didn’t know what they were doing, yet were able to do it,” Fripp explained to Financial Times. “What has changed in 40 years? It’s very simple. Forty years ago there was a market economy. Today there is a market society. Today, everything, including ethics, has a price.”

But last September Fripp hinted at a resolution of sorts in his online diary while announcing a new phase of King Crimson activity was underway. “Contingency: the removal / dwindling-effect of four contingencies that restrained and limited my ability to act on choices and decisions,” he explained.
1.     The likely UMG settlement
2.     The non-industry dispute, although without resolution and without agreement, has a de facto position close to that intended.
3.     The almost-completion of The Guitar Circle book.
4.    The completion of the DU Reading Project.”

With the “likely settlement” of his Universal Music grievances, Fripp said the latest Crimson lineup started to come together during a meeting with drummer/guitarist Bill Rieflin. “Discussed: the Point Of Seeing for a Future Crim with three drummers. At 18.55 Bill declared his participation. So, at 18.55 King Crimson VIII moved to its next stage of actualization.”

“The Point Of Crim-Seeing was of a conventional Back Line – Gavin Harrison, Bill Rieflin, Tony Levin and Pat Matstelotto – reconfigured as the Front Line, with Mel Collins, Jakko Jakszyk and myself as Back Line,” Fripp wrote in his web diary. “All the Crims have expressed great excitement at the return to Go! mode.”

Fripp elaborated to Uncut magazine: “King Crimson is returning to active service. We are on-call to be ready for a live performance on September 1, 2014. Seven members. Four English, three American. Three drummers. It’s a different configuration of King Crimson than before. Some are familiar names, maybe more than others… The first performance will take place in either North or South America. There will be rehearsals primarily in England, and the final batch of rehearsals will most likely be in America in August or September 2014. There is a plan to include the UK in the tour dates, but it depends on a number of circumstances. Right now the primary geographical focus is the United States.” 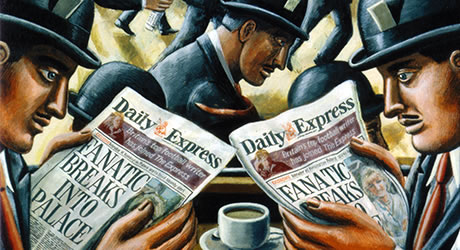 Today American tour dates were announced, the first under the “King Crimson” name since 2008, and Fripp’s first since 2010. All tickets go on sale Friday, June 6, 2014 at 10:00am (presale is Thursday from 10 am-10 pm; use password “CITISOC ” for Boston and “ELEMENTS” for San Francisco; “THRAK” or “CRIMSON” for other cities). Note they are listed as a “Farewell Tour“…

*Not listed at dgmlive.com but revealed here