As previously reported, The Flaming Lips are remaking The Beatles’ entire Sgt Pepper’s Lonely Hearts Club Band album with a slew of friends and MGMT, Tame Impala, Foxygen, Phantogram, Birdflower, Zorch are some of the artists being asked to contribute. Now Miley Cyrus is joining the collaboration, singing “Lucy in the Sky With Diamonds.” Wayne Coyne instagrammed the below photo noting that MGMT frontman Andrew VanWyngarden is also on “Lucy” and that fans of Lennon and the Fab Four are going to “love love love this track“:

Besides Andrew and Miley on “Lucy” and Birdflower covering “Within Without You,” the artists that contribute to the remake album, and what songs they appear on is still being worked out (many more details have been posted in The Future Heart’s continually updated post on the LP). It seems MGMT will appear on other tracks with the Lips, be it Pepper covers or other projects. “I love MGMT and I hope we can do more stuff with them in the future,” Steven Drozd told rocksucker.co earlier this month. “They did some vocals on ‘Worm Mountain,’ but I would like us to get together for a mega-jam.”

The session with Miley on March 14th followed both the Lips’ writing session for new original music with Miley earlier that week and Steven and Wayne joining Cyrus on stage for the second time the night before at the Tulsa stop of Miley’s Bangerz tour. During the Tulsa show Wayne and Miley sang “Yoshimi Battles the Pink Robot” as a duet backed by Steven Drozd on keyboards and Miley’s band, as they did last month in Los Angeles. And again they played the song twice, back-to-back, for no apparent reason. Also as before, Wayne had giant silver bubble letter balloons (they read “Fuck Yeah Tulsa”).  During the first time through the song the crowd began throwing their bras on stage and a fan wearing a hot dog costume got so excited he threw his whole outfit up. For the second singing Miley put on the hot dog suit and encouraged more bras to be flung at her and Wayne.

A recap of the Lips joining Miley in Tulsa follows below.

Let’s Go To The Video Tape

Pro tip – skip to 2:50 to see Coyne put the bras on his head. You can also watch a tiny bit of the performance – and the bras piling up – here. 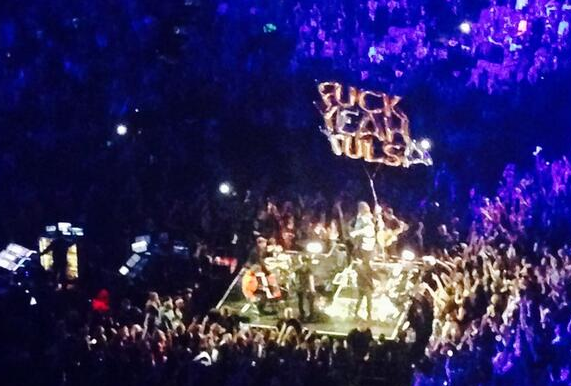 Steven Was Excited for Different Reasons

These ridiculous church protesters outside the Tulsa @MileyCyrus concert are adding excitement to an already manic scene. Magic! #bangerz

@jimmyjames4 I asked the main protester that and he said, "what is The Flaming Lips?" Then " well, it sounds like they're goin' to hell"

Riding the coat tails of @MileyCyrus and @waynecoyne is really bringing some excitement to my Twitter feed…. Thanks y'all !! #bangerz

Wayne Was Excited About…

@waynecoyne so nice to hang with you guys! And I'm looking forward to get cured from my bad hick ups!

Which brings us to March 14th’s recording sessions with Miley…
…and, Oklahoma’s own, Hanson: