Earlier this month Oregon Live confirmed, “Built to Spill is at work on a new album in Portland. Quasi’s Sam Coomes is producing the Boise indie rock act’s new set at Jackpot! Recording Studio, with Adam Lee (with a little help from owner Larry Crane) engineering.”

Built to Spill starting recording their eighth album in spring 2012 at Portland’s Audible Alchemy with Steve Lobdell – the same studio and producer as You in Reverse.  Originally intended for a 2013 release, it was to feature new songs the band wrote since 2009′s There Is No Enemy include “Living Zoo,” “So,” “Never Be the Same,” ”Open” and others, some of which had been tested out live. “I’m trying to keep the songs short,” frontman Doug Martsch explained to Rolling Stone in 2011, “and there’s a couple of pretty poppy songs. But they’re all in different stages right now, and it’s hard to tell what real direction they’ll take.”

“We started in April [2012], but it’s going very slowly,” Doug updated to nashvillescene.com in September of that year. “Just chipping away at it and hoping at some point some things will open up. But that’s just the nature of making records — sometimes it takes many, many tries to come up with something that sounds good to me…Ever since Perfect From Now On I’ve been trying to [write shorter songs], because it’s just so much work with those long songs. But a few long songs keep coming through, because the songs seem to warrant that. That’s a lot of where their strength comes from is from being long and going through different passages or whatever.”  Doug later admitted that basic tracks for a full album had been recorded and he had significantly worked on guitar overdubs and keeping the arrangements focused.

All of that came to a halt soon after as bassist Brett Nelson and drummer Scott Plouf left the group.  According to a January 7, 2013 Warner Brothers press release, their departure was on “amicable” terms and Jason Albertini and Steve Gere would replace them.  As for the album, Doug “decided to bag it and start all over again with the new guys” as he explained to MTV after the initial few weeks on the road. “All we’ve done so far is do some shows. We haven’t really had a chance to delve in to new stuff.  We kind of worked on one new song.  Steve has played drums since he was a kid, but I don’t think he ever played very seriously.  He started playing with Brett Netson’s band, and I heard some stuff he recorded and I was like, Yeah, he’s doing pretty good.  So he’s just kind of becoming a drummer.  So all of our practices are pointed towards him getting really confident and comfortable with all of the live material.”

Despite all the work that had already been done scrapping the album was a necessity in Doug’s view. “We did the basic tracks and I’d worked on it a bunch, and I just never got excited, no matter what I did,” Doug told MTV. “I was getting shit done. It was all fine. It was working. It wasn’t bad. But I was not excited about any of it …ever. And I just kind of chalked it up to getting older. Maybe I’ve run out of excitement…I don’t know if I’ll do any better with these new guys. But I’m hoping that somehow there’s something happens in me. Those “eureka” moments, they just weren’t happening. And they don’t happen a lot anyway ever. They’re very rare. But you’ve got to have a few of them. You’ve got to have something that makes you think this is worth something, rather than just, I’m just doing this work and it will pay off in the end. I think that attitude is not a good one to have. It’s got to be something that moves me.”

“I’m not really sure what we’re going to do [about recording the next album]. We might try to do two or three songs at a time, rather than tackle a whole album at a time. It’s all kind of up in the air right now.”

With the new album on the backburner, Built to Spill focused on touring throughout last spring, culminating at Memorial Day weekend at Sasquatch (and a side gig opening for Cake in Orgegon). Last summer brought appearances at Sub Pop’s Silver Jubilee and the Rock For Oklahoma Benefit, and an extensive tour of Europe and every corner of the United States following throughout the remainder of 2013. With the line-up still adjusting to playing with each other, the setlists were heavy on covers: Blue Öyster Cult’s “Don’t Fear the Reaper,”  The Smiths’ “How Soon is Now?,” Captain Beefheart’s “Abba Zaba,” Metallica instrumental “Orion,” Dylan’s “Jokerman” and more (The Clash, New Order, Neil Young, Pavement, Cheap Trick).  In a way it was as though they had started over.  It was almost as though they were a proverbial teen band in a garage jamming on a wide range of covers.  The difference was that they also had a back catalog to lean on and the bulk of their sets were built around standouts from their classic ’90s trilogy: There’s Nothing Wrong with Love (“Big Dipper,” “Stab,” “In the Morning,” “Reasons”), Perfect from Now On (“Kicked It In the Sun,” “Made Up Dreams”) and Keep It Like a Secret (mostly “Carry the Zero,” “Center of the Universe” and “The Plan” but also “Sidewalk,” “Else,” and “You Were Right”).  To add to that, most shows were opened the same way that 2006’s You In Reverse began, with a monster jam on “Goin’ Against Your Mind.”

“I just like to play music,” Doug told thefourohfive.com last October. “Normally we have a cover at every show and that’s just the highlight of the evening for me. Being able to play and sing songs you love is very fun, and it’s also fun to figure them out, it adds a sort of puzzle aspect to it, trying to figure out what chords they are playing, what exactly they are doing. We mainly do live covers, we like to do them like pretty dead on, but it’s something kind of spontaneous.”

“Jokerman” – one of the highlights of recent Built to Spill shows – will appear on Bob Dylan in the 80’s: Volume One, a new tribute album due March 25th (streaming here).

As for originals and the next Built to Spill album…

“Yeah we are still working on it,” Doug told thefourohfive.com. “Jason lives in Portland which is a eight-hour drive from Boise and he also has family, he has a little kid so it’s a bit difficult as we either have to go to his or he has to bring his family. He just moved there so he still doesn’t have his network. At the moment we have all the songs we did last summer that we reworked, and then we have a few new ones. We are still at the stage of figuring out which ones are going to make it on the record. And it’s also Steve’s first album. So yeah I think it may be a couple of years down the road before it actually comes out.” 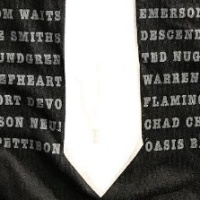