Karen O with The Flaming Lips and much more…

One of the apparent perks of being in a Flaming Lip is play-dates with cool pals… like MGMT or Modest Mouse, The Chemical Brothers or Peaches, Nick Cave or Henry Rollins:

Wayne Coyne to Pittsburgh Post-Gazette, “I talked to people all the time who saw us at Lollapalooza 1994 where we had 10 bubble machines out there. Sometimes the bubbles would blow the wrong way and when Nick Cave was playing on the other stage, the bubbles would hit him in the face.”

I’ve known [Henry] since the early ’80s, seeing Black Flag and just being a fan.  I think he’s an interesting, smart, progressive, cool guy. But I did also have an inkling, and I was right, that as much as he loves music, and he truly loves music, that he would not have ever listened to ‘Dark Side.’ When I e-mailed him and said, ‘Do you want to do this thing?’ he said, ‘Yes, but I’ve never heard it. I’ll have my assistant run out and grab it, so I know what you’re talking about.’ Which was perfect, because we were not trying to do some homage to Pink Floyd. Certainly, of all groups they don’t need it. We were just trying to say, ‘Here’s a bunch of characters inhabiting this work.’ I thought it should be people who are not like Pink Floyd people. The Flaming Lips, we’re like Pink Floyd people, but Henry is not. I thought, ‘we had to do those voices, they’re so much a part of those songs’ — and Henry has a great, distinctive, authoritative voice.”

Most recently it was announced The Flaming Lips will tour with one of Steven Drozd’s new favorite bands, Ariel Pink, and Wayne Coyne revealed he’s trying to get Yeah Yeah Yeahs front-woman Karen O to appear with The Flaming Lips on The Late Show with David Letterman.  Like MGMT, Karen appears on The Lips’ last proper album (Embryonic) but worked with them over the phone.  There’s no word yet on Karen’s perspective of working in person with The Flaming Lips (on Letterman or live dates), nor when they are even booked for Letterman, with or without Karen [UPDATE: The Flaming Lips are booked for 7/28/2010 – Season 17, Episode 327 – as is Michael Keaton].  At this point it’s just talk and to put things in perspective, Wayne told Q (July 2010 issue) he was trying to get MGMT to guest with The Flaming Lips at Glastonbury on one of the songs they appear on Embryonic, “Worm Mountain” – which didn’t happen.  Neither did the surprises he hinted at for this year’s Bonnaroo, such as Steve Martin sitting-in.  Still, this is the band that convinced Justin Timberlake (at the height of his post-‘N Sync solo breakout) to mime playing bass, dressed up as a dolphin… Karen O doesn’t seem so far-fetched, schedules permitting.

Now when is that Letterman appearance?

Wayne Coyne to BBC 6 Music: “I would love to play shows with [The Yeah Yeah Yeahs] and do even some of the songs that we’ve done together and have her on stage.  She’s just so great to watch and she has such a style and a way about her.” 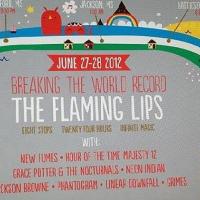